My wife and I left for church Sunday before last, but never made it. Our experience on the way was like no other.  We will likely never forget it. No sooner had we set out on a rural road, when we encountered a single car accident. A minivan was on its side, flames were leaping out from under the hood and they had already encroached on the passenger compartment. A woman was trapped inside. Discover what happened and how this tragic event can offer us an important spiritual lesson. 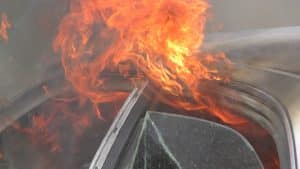 To be honest, my first instinct was to tell my wife to back away. I feared for her life, thinking the vehicle might explode at any minute. She stepped away and began to pray. The other two men and I attempted to pull the woman out through the window but we couldn’t move her. She was trapped. The vehicle was on its side and we were  unable to open the door. It was impossible to know what she was caught on. The fire was worsening, and her screams were growing more frantic. We decided to go around to the other side and attempt to push the van over on its roof, thinking that it would be easier to pull her out. We could not turn it over.

We ran back to the window, fearing the worst. As we pulled this time the fire greatly expanded and black smoke billowed up and enveloped the three of us and the woman inside. We could not breathe nor see. We were all choking. With very heavy hearts, we were forced to step away leaving the screaming woman inside. We assumed we were about to witness a horrific death. It appeared there was no way to rescue her. 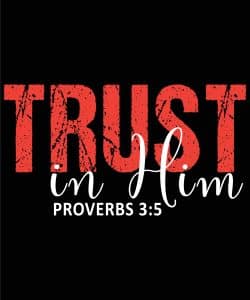 While we had been pulling, my wife had been praying. “Lord, free her from whatever has her bound up.” Suddenly the wind direction shifted, and the smoke cleared away from the window. This was our one final chance. We had to try one more time. Surprisingly, this time we pulled her out, some of her clothes were on fire. Because this was a minivan I feared that there might be children inside. I quickly asked her. She said, “No, just me.” These were welcomed words because, within 10-15 seconds of pulling her through the window, the entire vehicle erupted into a blazing inferno. We were all lucky to be alive!

Quickly we carried her as far from the fire as we could, expecting an explosion. I asked her if I could pray over her. She gave me an emphatic, yes! She was severely burned, her skin blistering off. As I prayed, my wife gathered up towels from a neighbor to help her. She appeared to be in shock. Just then, the firetruck rolled up and instantly had water on the flames. They extinguished the fire before things got worse. Medics soon arrived and after stabilizing her, she was taken by helicopter, I assume to a burn hospital. We don’t even know her name. 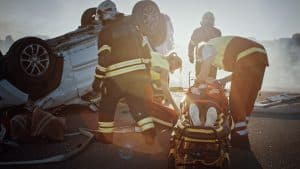 Why did I relate this story to you. First and foremost, to ask you all to pray for this unnamed woman. Not knowing who she is, I have no way to check on her. But, with her burns, and possible other injuries, she will likely have a long, painful healing process ahead. As for those of us who helped her, it is not my intent to draw attention to the four of us. I don’t think we did anything extraordinary. We did what I am sure all of you would do.

Having now had just over a week to reflect on this event, I can see some spiritual lessons. I firmly believe that my wife’s actions played an essential role in getting this woman out. She prayed nonstop. The three of us had pulled to no avail. But our pulling coupled with her prayers got her to safety. I am reminded of the old saying, “pray as if everything depends on God, and work as if everything depends on you.”

I am left with this sobering thought. This woman was ensnared in a blazing inferno. She could not extricate herself. She needed assistance. The heat, flames and screams and the entire event caused me to reflect on the people trapped in the fires of hell. None of us like to even think about hell. Seeing first hand the torment of this woman surrounded by fire, the thought of anyone being thrown into the blazing furnace, where there will be weeping and gnashing of teeth, like it says in Matthew 13:50, frankly scares me. 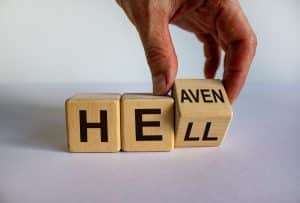 Thank God we were able to pull this woman from the inferno. When a soul is in hell, it’s too late. It was scary running towards a burning car. For many of us, its even scarier talking to others about matters of faith. Assuming we would all be willing to risk our lives to save someone from a burning car, shouldn’t we be more willing to try to save them from the eternal blazing furnace of hell?

I am haunted by the thought of what could have happened to this woman if we had not taken that route to church. She would likely have died.  We should all be more haunted by what might happen to the people we encounter on the road of life, if we don’t share the saving news of Jesus Christ.

O my Jesus, forgive us our sins, save us from the fire of hell, lead all souls to heaven, especially those who are in most need of your mercy. And dear Lord, bring about a full, complete, and quick healing for this woman. Amen!

The pictures in this newsletter are just stock photographs and not from the incident above. As always, I love to read your comments below as well as hear from you personally you can reach me by clicking here.