We are all called to be saints in God’s kingdom. But rarely do saints find their beginning in a church or a place of high esteem. Jesus himself got His earthly start in a feeding trough.  Many of the great prophets from the Bible also found their start in very humble beginnings. The story of Moses is one of the biblical stories that should give us hope. Moses was plucked from the weeds and saved from drowning in the river. Do you find yourself stuck in some weeds? Are you drowning in a river of sin? God has a great plan for your future. 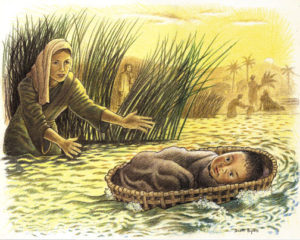 Immediately preceding the story of Moses, we are told this in Exodus 1:22 “Pharaoh then commanded all his people, “Throw into the Nile every boy that is born, but you may let all the girls live.” Therefore all of the Hebrew boys were being killed. In the beginning of chapter two, we see in verses 2-3 that after his birth, Moses’ mother hid him for three months to keep him from being killed and when she could no longer hide him, she put him in a papyrus basket and let him float down the river in hope that God would save him. Wow what trust!

All of you know the rest of the story. Pharaoh’s daughter discovered the basket in the reeds on the bank of the river. Moses’ sister saw that the Pharaoh’s daughter found the basket and approached to ask if she needed a Hebrew woman to nurse the child. When she said yes, Moses’ own mother was chosen for the task. Do you think this was pure luck or do you think God’s hand was in the outcome?  Do you see God’s hand in the outcome of your life?

Had the Pharaoh’s daughter not found the basket, that basket would have been baby Moses’ floating coffin. I find a symbolic meaning in the reality that baby Moses could not save himself from his impending doom and nor can we save ourselves from our own destruction. Our faith tells us that self-redemption is not possible. 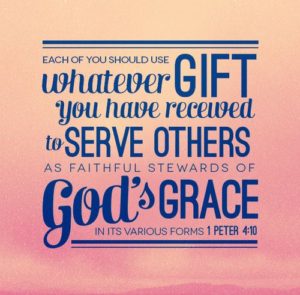 God has a long history of preparing people for their calling. Most of the people God has called have had a rocky and sinful past. God nonetheless calls them and He guides them in that calling. No matter what was in your past, God is still calling you too!

Perhaps there is someone in your life today that Jesus is working through to pull you from whatever basket you are wrapped up in. Will you let them? Will you let God work through them? It has been written: “Every saint has a past…and every sinner has a future.” It is time for us to repent and be changed! God needs you in the service of His Kingdom today! 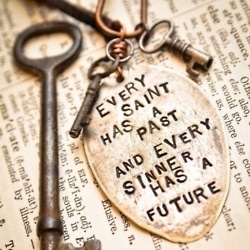 Now let me digress for a moment from today’s message. Think about this. How do you react when God calls someone else who is a known sinner or someone with a troubled past to be a leader in you church community? Do you respond more like the older brother in the story of the Prodigal Son who resented his father when he plucked his brother from the weeds of his sin?

Put yourself in the shoes of the other Levite woman whose baby boys were all being killed? I wonder if they rejoiced when Moses was saved or did they harbor resentment towards Moses or God because their baby wasn’t saved? If we see ourselves as good, faithful, hard working, God fearing members of our church community, do we harbor animosity towards those who for years wallowed in sin only to be called to some important role?  I hope not.

Some people might believe that whatever is wrong in their life, it can be fixed with their own hard work and effort. It can’t. Moses needed someone to pull him from the river and we need Jesus to save us from ourselves. 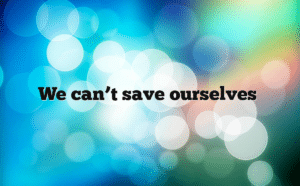 Okay back to my message.

Was it a chance occurrence that out of all the Egyptians the Pharaohs’ daughter was the one who found Moses and pulled him from the weeds? Is it a chance occurrence that God Himself is calling you from whatever weeds or river you might be drowning in? I doubt it. Just like Moses was called to lead his people to the Promised Land, God calls us to lead others to His Son. He always equips and prepares those He calls. We must trust that God knows what he is doing when He calls us.

I will close today with a two verses from the song THE PRAYER sung by both Josh Groban and Celine Dion and also sung by Andre Bocelli and Celine Dion. These words depict our trust and reliance on God to Guide us.

God is calling all of us out of the weeds of life. Let your past be past. Move forward in trust. You are a saint in the making!

If you have a couple more minutes, watch our two closing prayers as they are sung for us today. Josh Groban most likely had no idea where God might lead him in life when he was called to fill in at a rehearsal at age 17 and Andre Bocelli as a young blind man had no idea what God had in store for him. You and I don’t know where God is leading us at this time either. Let’s trust Him!

As always, I love to hear your thoughts and comments below. Additionally, click here to send me an email.

Latest posts by Brian Pusateri (see all)
← God’s Greatest TempleAre You At Peace? →