When I was a young boy my parents took my brother and me on a family vacation to Mammoth Caves in Kentucky, the world’s longest known cave system. This trip was an awesome family vacation and a memory that I treasure,as well as one I was able to repeat with my children when they were young. One of the things that I have never forgotten from our tour of the cave is this; after we had descended to 300-400 feet below ground, the tour guide turned off all of the lights. Without any light source, it was absolute blackness. I remember not being able to see my hand when I held it in front of my eyes. There in the bowels of the earth the tour guide shared this quip, “folks some of you might be worried about being this far below the surface but I can assure you this, if something were to happen to us, there is no place to get buried deeper, cheaper!”

At that time, everyone laughed at his joke. As I have grown up, I have learned there is one place that we can get buried deeper, cheaper, and this time it is a cave of our own building. The sin in our lives can not only bury us in a cave, but sadly in this case we get buried alive. Like the cave that I experienced as a child, the caves we build with sin can also envelope us in total absolute darkness. 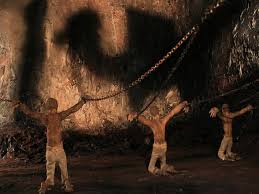 The Greek philosopher Plato wrote ALLEGORY OF THE CAVE, and in it there is a very important lesson that ties in to the point I hope to make today. InPlato’s writings there are a group of people who have lived chained in a cave all of their lives, facing a blank wall. The people watch shadows projected on the wall by things passing in front of a fire behind them and begin to ascribe forms to these shadows, using language to identify their world. According to the allegory, the shadows are as close as the prisoners get to viewing reality, until one of them finds his way into the outside world where he sees the actual objects that produced the shadows. He tries to tell the people in the cave of his discovery, but they do not believe him and vehemently resist his efforts to free them so they can see for themselves. This allegory is, on a basic level, about a human who upon finding greater knowledge outside the cave of human understanding, seeks to share it as is his duty, and the foolishness of those who would ignore him because they think themselves educated enough. (Excerpted from Wikipedia)

Socrates yet another Greek philosopher says the freed prisoner would think that the real world was superior to the world he experienced in the cave; “he would bless himself for the change, and pity [the other prisoners]” and would want to bring his fellow cave dwellers out of the cave and into the sunlight. Yet sadly, Socrates concludes that the prisoners, if they were able, would reach out and kill anyone who attempted to drag them out of the cave.

Another one of the interpretations of Plato’s allegory interprets the allegory of the cave as one about human ignorance and a people who are unable or unwilling to seek truth and wisdom. 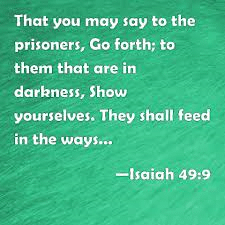 Throughout the Old Testament God has been clear that He wants to call us out of darkness and save us from the bondage of sin: Is 49:9

“Saying to the prisoners: Come out! To those in darkness: Show yourselves!”

“So Jesus, perturbed again, came to the tomb. It was a cave, and a stone lay across it. Jesus said, “Take away the stone.” Martha, the dead man’s sister, said to him, “Lord, by now there will be a stench; he has been dead for four days.” Jesus said to her, “Did I not tell you that if you believe you will see the glory of God?” So they took away the stone. And Jesus raised his eyes and said, “Father, I thank you for hearing me. I know that you always hear me; but because of the crowd here I have said this, that they may believe that you sent me.” And when he had said this, he cried out in a loud voice, “Lazarus, come out!” The dead man came out, tied hand and foot with burial bands, and his face was wrapped in a cloth. So Jesus said to them, “Untie him and let him go.” 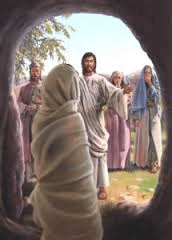 Much like Plato’s allegory this story of Lazarus is packed with its own allegory. Martha said there  would be a foul odor emanating from the cave. Did we perhaps enter into our Lenten journey with the foul odor of sin? There was a large stone blocking the entrance to the cave in which Lazarus had been buried. Have we too blocked the entrance to our soul? What is keeping Jesus from reaching you?

Lazarus was wrapped up. What in our life has us wrapped up? Jesus called Lazarus out of the cave from death into life. He then unbound his wrappings and set him free. Is He calling us out of our cave and ready to set us free?

When Easter arrives we will listen to yet one more story of a cave. This time it is Jesus Himself who was in the cave for 3 days.

“But at daybreak on the first day of the week they took the spices they had prepared and went to the tomb. They found the stone rolled away from the tomb; but when they entered, they did not find the body of the Lord Jesus. While they were puzzling over this, behold, two men in dazzling garments appeared to them. They were terrified and bowed their faces to the ground. They said to them, “Why do you seek the living one among the dead? He is not here, but he has been raised. Remember what he said to you while he was still in Galilee, that the Son of Man must be handed over to sinners and be crucified, and rise on the third day.” 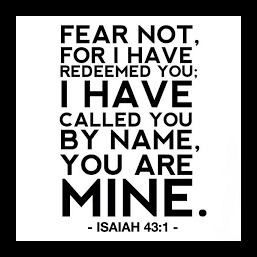 Jesus is calling today, “place your name here; COME OUT!” Will you go to Him?

Dear Heavenly Father, I have spent too much time in the darkness of this cave caused by my sin, Please send your Holy Spirit to guide me by the hand this day into the light of your Son Jesus Christ, amen