Back in 1990, when I lived in Florida, I had a habit of stopping every morning at Dunkin Donuts on the way to work. The store was only a few blocks from my office. One day, early in the morning while still dark, after getting my donut and coffee to go, I spotted a man digging through a dumpster looking for food. I turned into the parking lot and my headlights startled him. He started to leave but I called him over. I have always wondered if what happened next was a miracle……it certainly taught me a lesson….please read more… 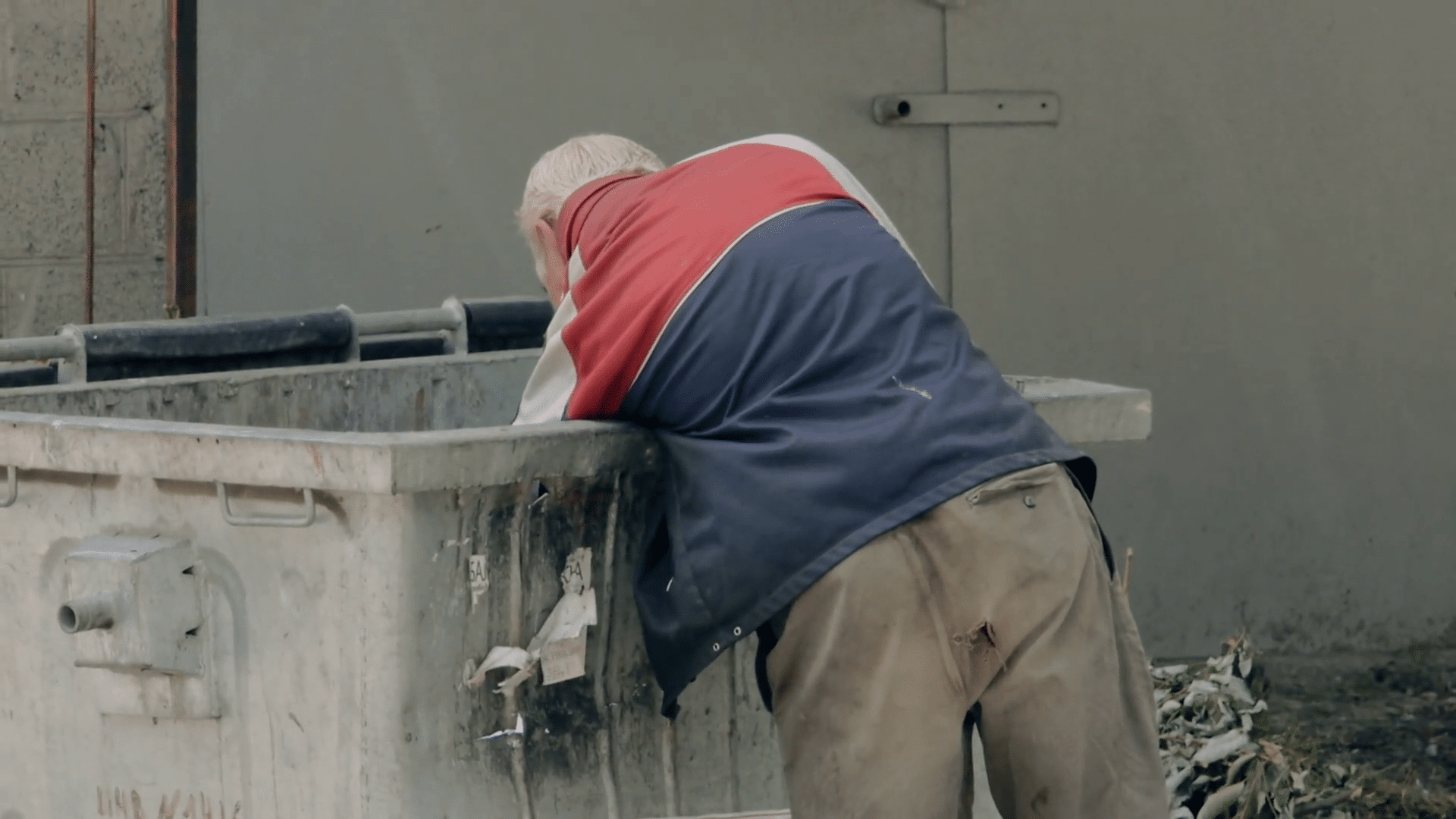 This man appeared to be homeless. He looked and smelled as if he had not bathed for quite some time. I knew he was looking for food. I had a bag with two donuts in the car. I gave him the donuts. I wished him well, told him I would pray for him and started to drive away. I had not driven 100 feet, when my conscience got the best of me and I thought to myself, “I could have done more.” I instantly turned around with the intent of giving him the $20 bill in my wallet. He was nowhere to be found. Not even 30 seconds had passed since giving him the donuts. Where did he go? I got out of my car and looked for him. He seemed to have vanished.

As I drove the remaining trip to the office I wondered, “Was this man actually Jesus?” I thought to myself: “I am glad I gave him those donuts, but I wished I would have done much more.” Until the day when I am face to face with my savior, I will never know if it was Him or not. “Had I only given him my scraps,” I wondered.

I am sharing this story with you because there is a lesson here for all of us. Proverbs 3:9 states: “Honor the LORD with your wealth, with first fruits of all your produce.” We all know the story of the poor widow from Mark 12:41-44: “He sat down opposite the treasury and observed how the crowd put money into the treasury. Many rich people put in large sums. A poor widow also came and put in two small coins worth a few cents. Calling his disciples to himself, he said to them, “Amen, I say to you, this poor widow put in more than all the other contributors to the treasury. For they have all contributed from their surplus wealth, but she, from her poverty, has contributed all she had, her whole livelihood.” 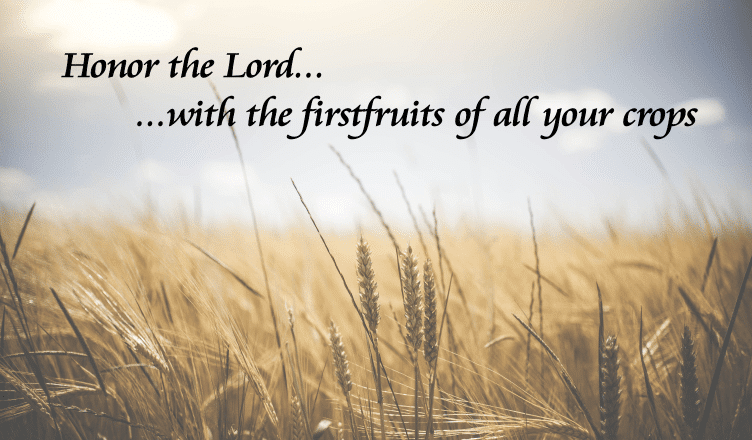 We are also very familiar with the story of the rich man and Lazarus from Luke 16:19-31: The rich man dined sumptuously but lying at his door was Lazarus, covered with sores, who would gladly have eaten his fill of the scraps that fell from the rich man’s table. We also learn from this parable that after his death, this rich man wanted a “do over” but the chasm was too great to cross. He was stuck where he was, based on how he lived his life. There was no second chance!

I must say my conscience is clear from my encounter with the man at the dumpster. I did give him all of the food I had in the car, and after a split second of thought, I attempted to give him all of the money in my wallet. I wish I would have thought of giving him the money sooner; but to be honest, there have been many, many more times when I failed to give enough. I am grateful for the lesson I received that day. 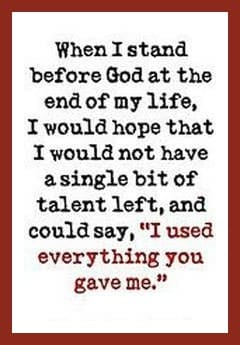 As Christians, we know that we are called to give back to God not only from our treasure but also from our time and talent. Let me ask you, do you give your first fruits or do you only give God the left over scraps of your time, talent and treasure?

There are 168 hours per week. If we only give back 10 percent, we should be giving him almost 17 hours. In many cases, God at best gets one hour on Sunday. If you totaled up the time that you give to God and to helping others how much time does it add up to?

What talents has God given you? Do you give the first of those talents back to God? In what way to you use your talents to grow the Kingdom? 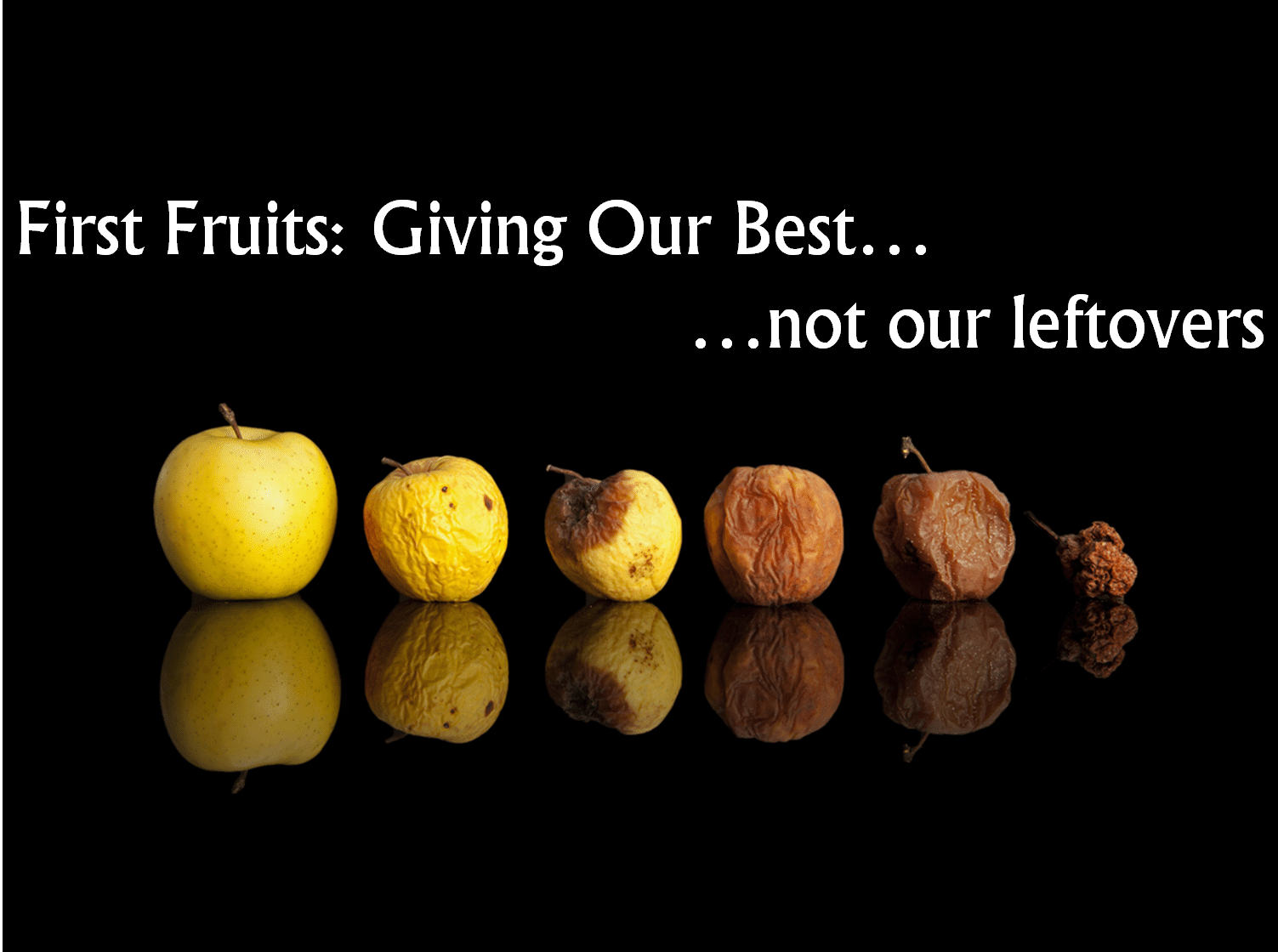 We must all ask ourselves the question: Do we give God the first fruits, or does He only get the scraps? We must remember the rich man didn’t get a second chance.

Heavenly Father, you have blessed me with so much and you ask for so little in return. Please forgive me Father for those times that I was too selfish to give to those in need. Forgive me for the times that I gave so little of my time and talent to the work of your Kingdom. Strengthen me in my resolve to do better, amen.

It only takes a few minutes to speak with someone at your church or parish about inviting me to come to put on a retreat. Will you do that for me? Click here for more details.

Time is running out. Have you signed up to join me on the Pilgrimage to the Holy Land? The information is below.