“Healing the brokenhearted, and binding up their wounds” 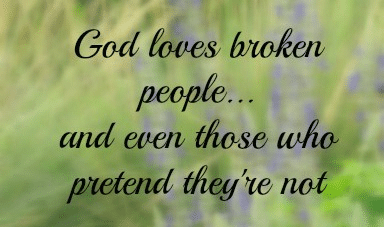 Let’s travel together back to the fall of 2011. At that time on my Christian journey I felt God nudging me and calling me to draw closer to Him. Specifically as I have written about before, I felt Him encouraging me to accept the message that in order for me to help others draw closer to Him and help them to begin to break free from the sinful areas of their lives then I too had to first break free from the chains in my own life. It became evident to me in my silent prayer time that God loves broken me.

Like most, if not all Christians, I had aspects of my life that clouded a more joyous union with my Savior. I had recurring sinful habits and other struggles of faith that challenged me. My struggles, like Paul’s thorn were things that on my own I did not seem to be able to overcome.

Pride had kept me struggling alone. At that time I felt called to be more open to my close friends about the issues in my life that kept me from being the best version of myself that God was calling me to be. First, I had to accept that He alone was the one who could break the chains that had me bound. Next I needed to understand that God wanted to manifest Himself to me not only through the church, through the sacraments and through His written word in the Bible, but also through close Christ-centered friendships.

God assured me with mercy and forgiveness. But then He did one other thing. God granted me the ability to see that He was calling me to share this good news of freedom, this breaking of chains, this forgiveness of sins, and this joy that was possible for us only through our belief in His death on the cross and His resurrection from the dead. He was calling me to reach out and to evangelize. Ever since that time I have been writing these 4thdayletters and speaking to any group that invited me. I am so anxious to share my love of Jesus as my Savior. More importantly, I have no doubt that God is also calling youto share this good news. How will you respond? 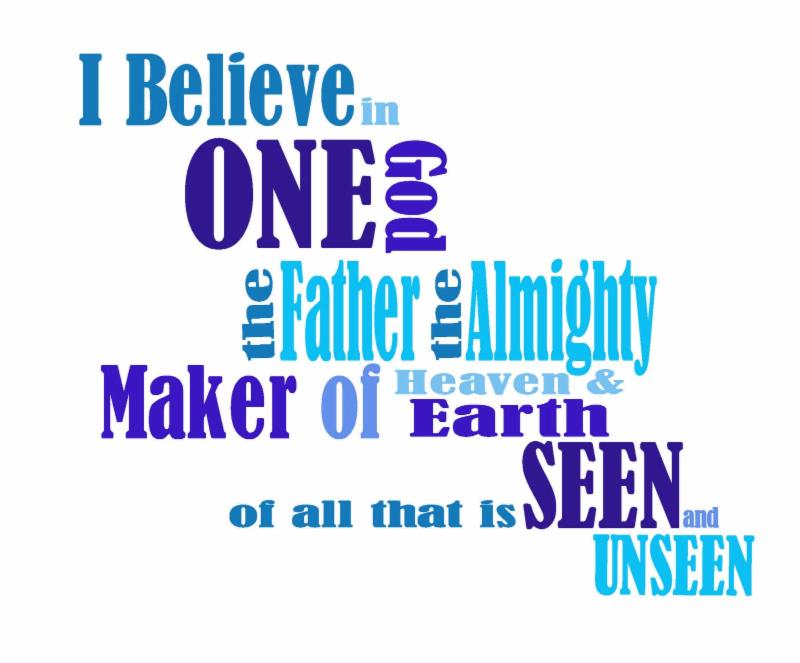 So now, just a couple of days past Easter, I want to shout from the mountain top my love for Jesus Christ. I want to make my public profession of faith. For I believe in one God the Father almighty who is the creator of heaven and earth. I believe in Jesus Christ who is the only begotten son of God. I believe that for the salvation of all people He came down from Heaven and was born of the Virgin Mary and became man. I believe He was crucified under Pontius Pilate, He suffered death and was buried. I believe that He rose from the dead on the third day. I believe that in accordance with the scriptures, He ascended into Heaven. I believe in the Holy Spirit. I believe we are called into one holy catholic (universal) apostolic church. I believe He will come again to judge the living and the dead and I look forward to the resurrection from the dead and the life of the world to come. I pray that all who read this can be unified in these same shared beliefs.

I believe that we are all broken people. The dictionary defines “broken” with these words: damaged, altered, made weak, fractured, cut off, imperfect, fragmented, shattered, and smashed. Have you ever felt that some or all of these words describe your relationship with God? I have. But my friends, even knowing we were broken people God still loved us. This is the good news!

John 3:16 “For God so loved the world that he gave his only Son, so that everyone who believes in him might not perish but might have eternal life. For God did not send his Son into the world to condemn the world, but that the world might be saved through him.” 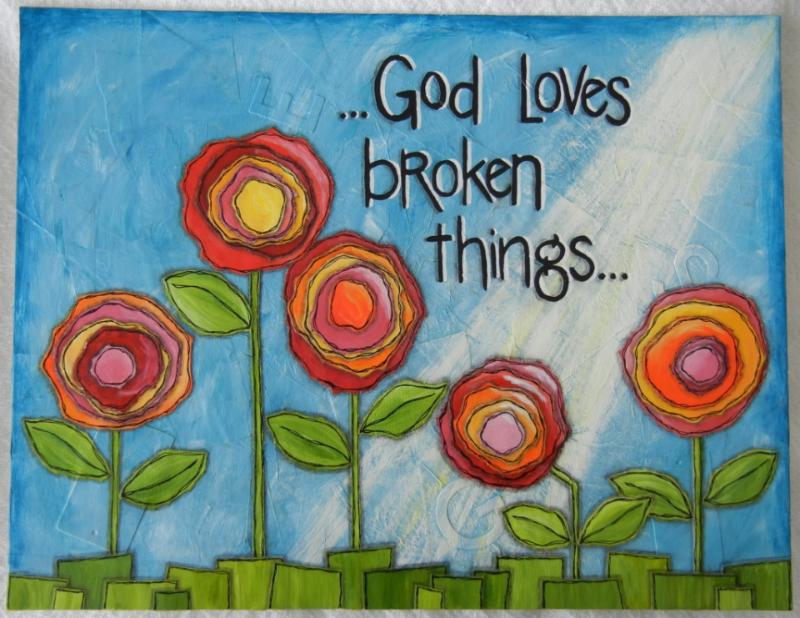 In Isaiah 53:4-6 we read: “Yet it was our infirmities that he bore, our sufferings that he endured, while we thought of him as stricken, as one smitten by God and afflicted. But he was pierced for our offenses, crushed for our sins; upon him was the chastisement that makes us whole, by his stripes we were healed. We had all gone astray like sheep, each following his own way; but the LORD laid upon him the guilt of us all.”

So in this Easter season we have reason to celebrate. Our God knew we were broken people and still He gave everything including His life for us because He wanted us to spend eternity with Him. Could it be that God simply loves BROKEN THINGS?

In many of my writings and in all of my speaking opportunities I speak about us being broken people. God inspired me to write the Parable of the Broken Door, and from that Parable I formed Broken Door Ministries and based on that parable author Joseph Gallowaywrote the book “The Broken Door.” Even in our broken and sinful condition God is calling us to share the news of salvation. He wants us to bring people to him He wants to break the chains that bind us all. He wants everyone to know He rose from the dead. There are so many hurting people that need this news and He is counting on you and me to tell them. 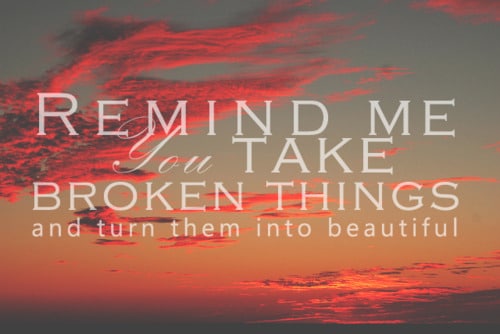 In Acts 10:43 we read: “To him all the prophets bear witness, that everyone who believes in him will receive forgiveness of sins through his name.” I believe that if we do not acknowledge our brokenness then we have no reason to be saved. Jesus came for the lost. Let’s admit our weaknesses and accept Jesus as our savior. 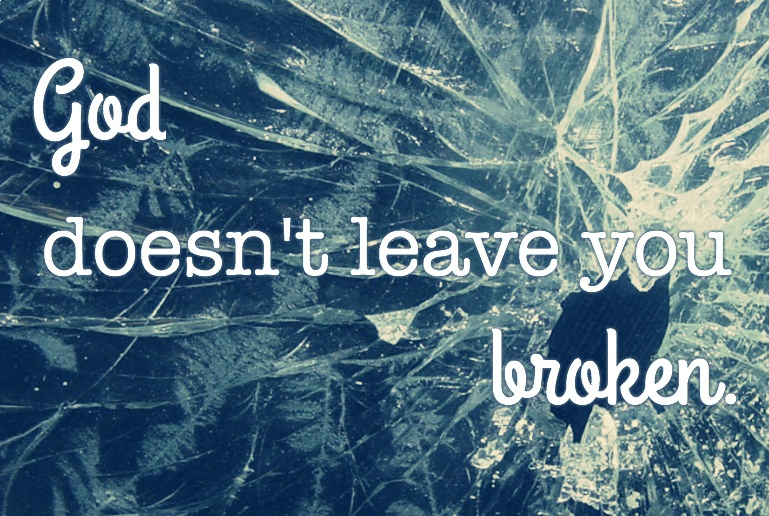 On Good Friday Jesus took our sins to the cross. On Easter morning Jesus forever broke the  chains of death. Now Jesus wants to heal us of our brokenness whatever it might be. It could be habitual sin, or it could be just some lingering hurt and pain from years gone by, or the inability to forgive someone, or the harboring of anger towards someone or something or the brokenness of a serious illness. When we allow Jesus to break our chains and heal us we will be better positioned to share the story of Christ’s salvation with others.

I pray that you may be filled with the joy of this Easter Season and that you will share that joy with others.

Heavenly Father, you gave us your only Son, so that everyone who believes in him might not perish but might have eternal life. Heavenly Father I do believe in Him. Please give me the courage to share my belief with others and in doing so, lead them to your son and the source of their salvation. Amen