No that was not a typo, nor was it a spelling mistake, I meant to write “Mary Christmas” not Merry Christmas. Humans have always had heroes to look up to. History is filled with them. Christianity is filled with heroes too! We call them saints. Since the earliest days of Christianity, Mary has been considered the holiest and greatest saint. She gave birth to our Lord. We have a lot to learn from her. Please read more. 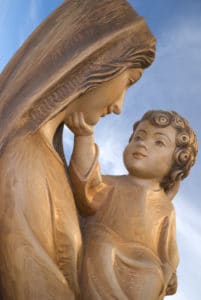 These last two weeks of Advent give us an ideal time to read Scripture to learn more about Mary so that we can reflect on her life and emulate her response to God’s call. Unfortunately, Mary’s role in the Church is often a source of debate between various Christian denominations. I have always been committed to approaching each week’s topic in a unitive and ecumenical way. I will attempt to do so on this as well.

To that regard, let me dispel one of the big Marian myths. Catholics do not worship Mary and they never have. They do, however, hold her in the highest regard. Although they venerate (honor and revere) Mary as the Mother of our Savior, they adore God and God alone. The Church has always been clear that the veneration of Mary is subordinated to that of her Son, Jesus. Catholics also believe that Mary became the New Ark of the Covenant because she also carried God. 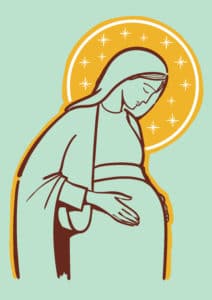 Let’s look for some common ground on which we can agree. Catholics believe that everything Mary has ever done was to draw attention to her Son Jesus Christ because He is our Savior, Redeemer, and our source of eternal life. Hopefully we can all agree on that! My purpose today is single minded, to answer one question. What can we learn from Mary to help us all on our Christian journey?

Let’s turn to Scripture for help in answering that question. The Bible is filled with typology. Biblical typology is the biblical study of types. Types, meaning symbols, are used to represent something else. For example, the Passover lamb in Exodus served as a type or symbol of Jesus Christ who would later come as a sacrifice for the atonement of sins.

The following passages give us some examples of biblical typology that symbolically refer to Mary. In Exodus, we see that the Ark contained three things, a jar with manna, Aaron’s rod signifying his priesthood, and the tablets with the commandments. In Exodus and Numbers, we see that a cloud overshadowed the Ark. We are told in Exodus 25:8 that the Ark was the place where God Himself would dwell. 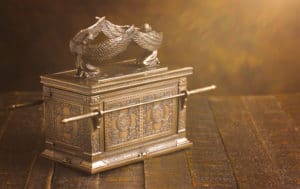 In 1 Samuel 4:11, the Philistines capture the Ark of the Covenant but they eventually returned it. We see more typology in 2 Samuel 6:1-15.  David went out to retrieve the ark. At first, knowing that Uzzah had been struck dead for merely touching the ark, David was afraid and said, “How can the Ark of the Lord come to me?” After three months when he saw that the house of Obed-edom, where the Ark was located in the hill country of Judah was blessed, David brought the Ark back to Jerusalem leaping and dancing as he did.

Luke 1:26-53 shows us a direct correlation between the first Ark of the Covenant and Mary. Mary was also overshadowed by the Holy Spirit when she was told by an angel that she would bear God’s Son. At first, she was fearful, but after being told “Do not be afraid, Mary, for you have found favor with God,” she set off in haste to visit her cousin Elizabeth in the hill country of Judah. Upon hearing Mary’s greeting, Elizabeth exclaimed, “Most blessed are you among women, and blessed is the fruit of your womb. And how does this happen to me, that the mother of my Lord should come to me?” The babe in her womb leapt. Mary stayed in the hill country of Judah for 3 months before returning to Jerusalem. In other words, Luke was making it clear to his Jewish readers that Mary was the New Ark of the Covenant.

Contained in this new Ark of Mary’s womb was the Word become flesh, the Bread of Life, and the Eternal High Priest. It is hard to miss the clear parallel to the first Ark.

So, no matter what Christian denomination we belong to, we can all learn a great deal from Mary. We see in her life someone filled with grace. We see a woman whose heart was pierced by this broken world. We see a woman who endured the unfathomable grief of losing a child. We see someone who was deeply prayerful. And finally, we see someone who responded to the angel with these words, “Behold, I am the handmaid of the Lord. May it be done to me according to your word.” Her fiat showed her willingness to live her life according to the will of God. 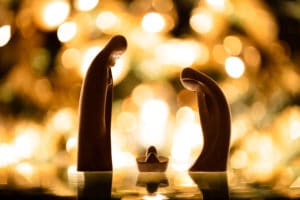 To make it a truly Mary Christmas this year, we must make haste to follow the example of Mary, the Mother of God and we must respond to God’s call in our own life with these words: “May it be done to me according to God’s word.” We too, have Jesus inside of us. When we align our will with God’s will, we will have the Merriest Christmas ever!

Heavenly Father, you chose Mary to be the mother of your Son Jesus. She was filled with grace, and you found her worthy to be the Ark of our Savior. Help me to learn how to be a better Christian by mirroring Mary’s example in my own life. Help me always say yes to your call. Amen!