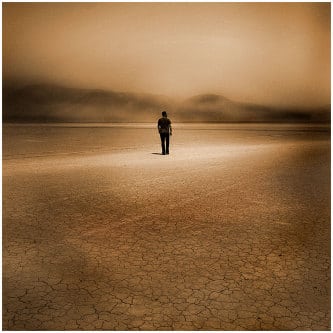 Recently I went through a period of time, about three weeks, where it was hard for me to pray. I have a daily routine that I try to follow each morningwhichinvolves reading the Bible followed by a period of prayer. During this dry spell I would wake up, make my coffee, and prepare for my prayer time, but the smallest things would distract me. I would even be aware that I was supposed to be praying but I would consciously choose other things to do and avoid my time with God. Has that ever happened to you? I suspect it happens to most of us.

We seem to go through periods where we feel very close to God and other times when we feel quite distant. I have experienced these spiritual cycles throughout my life. For a while I am on spiritual auto pilot, doing all the right things: daily prayer, regular mass attendance, frequent reconciliation, spiritual retreats. Then all of a sudden I seem to hit a spiritual road block. I have yet to put my finger on what causes the dry spells. Some are longer than others.

Many Holy people throughout the ages have experienced this dryness. It has been written of Mother Teresa that when she was early in her ministry, she experienced visions of Jesus speaking to her, only to lose that connection and long for it like an unrequited love for most of her last four decades. If Mother Teresa experienced these dry spells why should I be surprised if I do too? In Hosea 2:16we read: “Therefore, I will allure her now; I will lead her into the wilderness and speak persuasively to her.” Yes, as strange as it may seem, sometimes we seem to need some wilderness and desert dryness in order to grow. 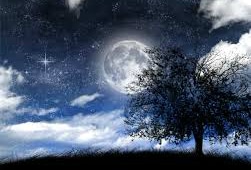 My most recent spiritual dry spell was broken in a somewhat unusual way. One morning at 3:30 am I walked out onto my back porch and looked up at the sky. It was one of the clearest skies I have ever experienced. Every star, the moon and planets were clearly visible in the sky. As I was gazing at the stars I was drawn to speak to God in audible prayer. That morning God seemed so near in the beauty of the clear sky. Just one morning later I walked back outside again to look up at the sky and pray. This time however, to my disappointment the sky was full of clouds. These stunningly different skies on back to back days gave me some insight for my spiritual journey.

I suddenly realized that the same stars, moon and planets were just as brilliant in the sky; they just weren’t visible because they were obscured by the clouds. At that moment I thought “wow it is the same way with God”. Some days he seems so clearly present and some days I can’t seem to find him at all. The fact is though, God is constant. God never moves. He never changes. Spiritual clouds just block our view at times.

Many things can lead us into spiritual dryness.For reasons we might not understand, sometimes God draws usto the desert to experience some degree of distance or dryness and he uses this to draw us closer to him. Matthew 3:17states: “And a voice came from the heavens, saying, “This is my beloved Son, with whom I am well pleased.” Interestingly immediately following his baptism and theFather’saffirmation of his son, the very next verse states: “Then Jesus was led by the Spirit into the desert to be tempted by the devil.” Matthew 4:1Another way we often end up in the desert, is that we take ourselves there by simply “getting lost” and we drift away from God for a time. 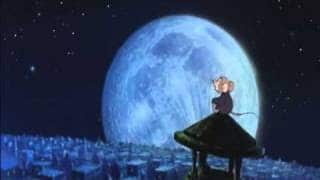 As I look back on that clear night with the moon, stars and planets so bright my mind drifts to an adventure film that came out in 1986 called “An American Tale”. In this animated adventure film Fievel Mousekewitz and his family, a family of mice, immigrate from Russia to the United States for freedom. However, Fievel gets lost and must find a way to reunite with his family. Fievel is washed overboard from the ship in a storm and hisparents presume he has drown; however, unknown to them Fievel floats to America in a bottle. Tanya, Fievel’s sister, tells her gloomy parents she has a feeling that Fievel is still alive, but her parents insist that the feeling will eventually go away. It is at this point in the film with Fievel and his sister miles apart yet both looking up at the same bright moon in the night sky, when they sing alternating verses of the song “Somewhere Out There”. Click to listen:

Beneath the pale moonlight,

Someone’s thinking of me and loving me tonight.

That we’ll find one another in that big somewhere out there.

This past Sunday we had three different readings all about “lost and found”. In Luke 15: 1-32we read about lost sheep, lost coins and finally one of the most well-known Parables in the Bible the lost son. In this story as we all know the son takes his inheritance and leaves and squanders his money on sinful living. Can you picture the son a long way from home looking up at the moon while at the same time the father is looking at the same moon?

Beneath the pale moonlight,

My Father is thinking of me and loving me tonight.

While the Father sings:

My son is saying a prayer,

that we’ll find one another in that big somewhere out there. 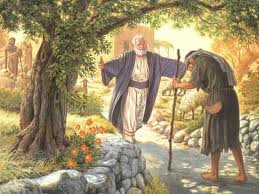 Eventually the son comes to his senses and returns home. Next we read one of the greatest lines in the Gospels: “While he was still a long way off, his father caught sight of him, and was filled with compassion. He ran to his son, embraced him and kissed him.”

Many great theologians have speculated over the years as to why we have these periods of dryness in our prayer life and faith journeys. An excerpt from a sermon that I recently read online said: “The final lesson that God teaches us when our prayer runs dry is that we must gradually learn to participate in the Cross of Christ. In times of dryness, we experience the thirst of Jesus on the Cross. If the Cross was Jesus’ way to the Father, then surely we, the disciples of Jesus, cannot expect to travel the scenic route free of all pain and hardship. When we experience darkness in prayer or in the marketplace, we are being invited to identify with Jesus in his suffering and in his experience of feeling abandoned by the Father. Also, in the desert we are being invited and challenged to trust that our God will not abandon us but will come to rescue us and redeem us (see Exodus 16).”

I don’t have a deep theological explanation as to why we have these dry spells. The quote above seems to explain it well. From my point of view I think that the well-known quote: “absence makes the heart grow fonder” may well be at play. During these periods when we seem removed from God we must remember that like the clouds that blocked my view of the stars, that spiritual clouds can and often for a good reason, temporarily block our prayer with God. We must never forget that God is there for us. He is longing for us to find our way back to him in prayer.

Perhaps we can learn something from a mouse named Fievel and now we can sing his verse with just one slight variation to God: “Somewhere out there, beneath the pale moonlight, God is thinking of me and loving me tonight.” God is always there for us. He is constant and he longs for our return, just like the father in the parable longed for the return of his son. When we do get through our desert experience and we are again drawn close to God, our prayer time will be better for the time away. We must never lose hope during these dry spells. Upon our return, God, like the father in the story, will catch sight of us and filled with compassion, He will run to us, and embrace us in his loving care.

Dear Heavenly Father, I love it when you are close to me in prayer. Help me to also embrace the times when you seem distant. It is during these times that you may truly be teaching me. I know you never leave me. Help me to be in tune to your message in these times of dryness, amen.