The Lion Sleeps Tonight, also known as “Wimoweh” and “Mbube” is a song written and recorded originally by Solomon Linda with the Evening Birds, a South African music group in 1939. It became a number one hit in the United States in 1961 for the Tokens. Here are three of the verses from that song:

Now you might be asking yourself “what does this have to do with me?” What can you possibly learn from this cute little song? Let’s take a look at the Lion/Satan analogy.

First off, lions often don’t sleep at night but instead they hunt under the cover of darkness in the gloom of the African night. If it is a moonlit night they will even wait until the moonlight is obscured by a cloud before they attack. During the daytime, lions often sit quietly and just observe their prey as if they were studying the dinner menu.

Here is what the Bible tells us. The KJV version of the Bible states this in 1 Peter 5:8: “Be sober, be vigilant; because your adversary the devil, as a roaring lion, walketh about, seeking whom he may devour.” The NAB records 1 Peter 5:8 this way: “Be sober and vigilant. Your opponent the devil is prowling around like a roaring lion looking for [someone] to devour.”  In these two versions we see Satan depicted as our adversary and opponent. We are told he is prowling around and in both versions he is seeking to devour us.

Satan, just like a lion, loves the cover of darkness. He is a cunning and deceptive adversary always lurking after our soul. If we are not careful it is easy for us to get devoured. How does he make us vulnerable to his attack? He does so just like lions catch their prey. Do you know what the key is for a lion to catch their prey? The key is isolation. Yes, that is right, isolation. Lions usually hunt in packs. Lions are known to eat a wide variety of prey. For our purpose here, let’s assume they have chosen wildebeest for their dinner entrée.

Once a herd of wildebeest have been spotted, the younger members of a lion pride will attack the herd. As the animals scatter the lions look for a younger, older or injured wildebeest that is not fast enough to escape. They then drive their target victim towards the more experienced hunters who are waiting in ambush. The isolated animal is now in serious jeopardy. The circle of life is about to play out on the African plain.

This is exactly what Satan does as well. Satan prowls the world for the ruination of souls. Satan uses either the shame of our sin or our over confident Christian pride to isolate us. Satan the lion might use our sinfulness to make us think we are unworthy to be among other Christians who we perceive to be much holier than us. Or just the opposite, our pride might lead us into the danger zone of believing we have our act perfectly together. We might think we are okay with our one on one relationship with God and we have no reason to be in any type of Christian community.

When either of the above things happen Satan lurks in the darkness ready to jump on our back and suffocate us just like a lion does to its defenseless prey. 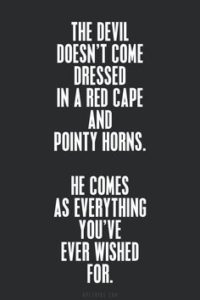 The theologian Dietrich Bonhoeffer once wrote this: “He who is alone with his sins is utterly alone!” Stated differently, allow me to say it this way: Any Christian who is isolated and alone without the fellowship and community of other Christian brothers and sisters is easy prey for a prowling Satan.

Satan, is a scheming opponent who uses this lie “Hush, my darling, don’t fear, my darling, I am asleep tonight” to trick us into letting our guard down. We need the spiritual protection of Christian friends and community. The next time you are tapping your foot and singing along with this old familiar song don’t forget that Satan the lion is always hungry and he NEVER SLEEPS!

So I will wrap up this analogy by simply asking you this question. Are you currently plugged into some form of small Christian group that meets regularly in an effort to deepen your relationship with God or instead are you an isolated Christian who is most likely on Satan’s next dinner menu? You do have a choice! 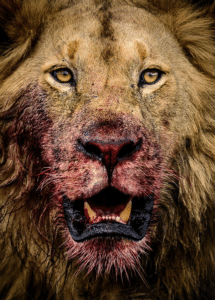 I want to extend a special word of thanks to the Courage apostolate for inviting me to speak at your conference in Washington D.C. this past weekend. The work of your ministry is changing lives and winning souls for Christ.