That was the question Brian put to me, Joseph Galloway about tithing while driving around Minnesota between back-to-back weekend retreats. I am privileged to be on the board of Broken Door Ministries. You may recognize me as the author of The Broken Door. I wrote it in support of Brian’s ministry, essentially telling his story. If I may say so, one of the best comments about the book on an Amazon review is that it is The Shack on steroids.

While in Minnesota, we visited the Basilica of St. Mary in Minneapolis. I spent some time there off alone, praying in an alcove, pouring out my heart about what to do now with my life. I’ve been going through a difficult period of brokenness due to my wife’s passing away last year. I just wanted to quit everything! My prayer was essentially, “Tell me what you want me to do.”

Brian was across the building, and no one else was there. Where and from whom did that message come? I told Brian of the experience. Of course as is often the case with Brian, that sparked a lively and thought provoking conversation over the next few days. 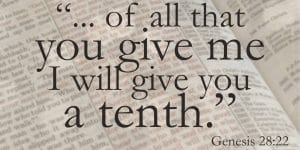 We both confessed that we didn’t always give to the church, much less tithe ten percent. We had fun surmising excuses we and others might use to justify our times of short-fall:

₪ “I’ve been on the Finance Committee; I’ve seen what people give.  I give more than most.” – It’s not a contest

₪ “10% of What? AGI or net? Include asset sales? Include tax refunds?”- All pretty Pharisaic

₪ “I pay a lot in taxes. So much of that goes to welfare.”- Render unto Caesar

Brian suggested that there must be a catalyst, some trigger that moves us to tithe. We considered a few: 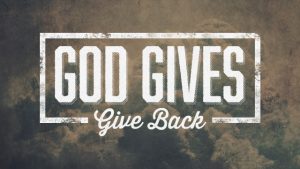 I’m sure you can come up with more. But, what was the catalyst for me? What made me tithe? As I pondered that over the ensuing weeks, I remembered that there was a catalyst. It was a friend speaking at Mass one Sunday. He said he and his wife decided they were going to start tithing 10 percent. Period. It didn’t add up, but they were going to be like Nike and ‘just do it’ and trust that God would provide.

At that time I had one kid in braces, and two more sets to go. My in-laws were dependent on me financially, and we were a one-income household. How was I supposed to cover my bills, save for college, and hopefully retire some day? The math didn’t work. 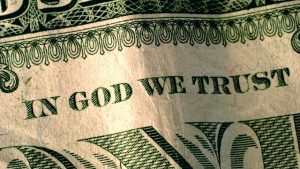 It is a matter of faith. God’s calculus is higher math than my algebra.

That testimony really struck me. If my friend was willing to try tithing, shouldn’t I? Did I believe the Bible passages, or not? Matthew 6: 24-34 tells us we cannot serve God and mammon. Jesus then goes on the say “don’t worry” four times. Did I trust God’s promises to provide or not?

Because my friend shared, I gained the courage to take that step of faith. I’ve tithed ever since, and God has provided for my every need beyond anything I deserve. Matthew 13 is the Parable of the Sower. The seed that fell on rich soil produced a hundred-fold. Tithing is rich soil.

Lent is the season of prayer, fasting, and almsgiving. What will be your catalyst for giving alms? What will help you step out in faith and tithe?

I would love to hear your stewardship story. How is God working in your life? What joy have you experienced in giving?

Blessings to you and your family this Lent, Easter, and throughout all the year. 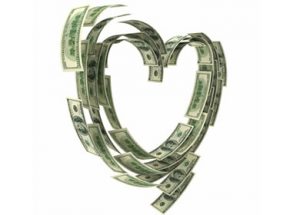 Dear Lord, we praise you and thank you for all the benefits you give to us. We are so blessed. Help us to respond with grateful hearts and generous giving