Miracles did not stop occurring after Jesus’ death on the cross. Miracles increased after His death and the number of people through whom these miracles were occurring, increased as well. “Rise and walk” were the words Peter used in Acts 3:6 when he cured the crippled beggar.  Jesus has been working miracles through His followers ever since. Today might be the day that God plans to work a miracle through you. If you fail to respond to His call to action, someone may lose out on a miracle. That would be a haunting tragedy. Don’t let this happen. Please read more… 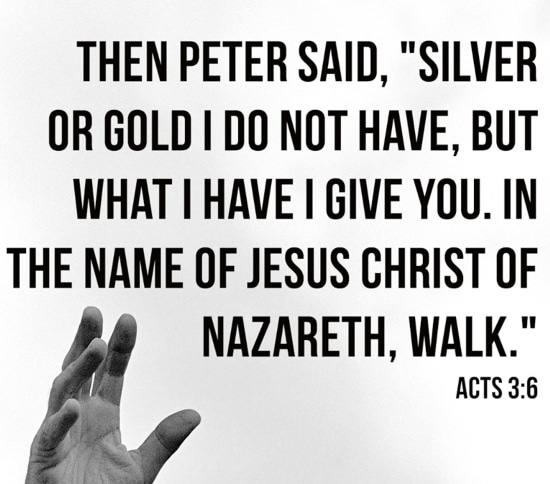 In my retreats, I often tell a story about the little boy who offered Jesus his loaves and fishes in John 6:9.  I also wrote about this story in one of my earliest 4th Day Letters. In that letter, I wrote the following paragraph.

Did Jesus need the boy? Did Jesus need the original loaves and fishes to feed everyone? Of course not! Jesus is God, the Creator of all that is. Jesus could have snapped His fingers and the entire crowd could have had Outback steaks, plates, forks, knives and napkins included. But that was not God’s plan. Jesus performed that miracle because someone, in this case the little boy, responded lovingly to His calling. And because of the little boy’s loving and unselfish act, thousands of people witnessed a miracle of Jesus.

The New Testament contains many stories of Jesus’ followers performing signs, wonders and miracles. Acts 14:3 speaks of Paul and Barnabas at Iconium and the wonders being done at their hands. Acts 19:11-12 gives us this account: “So extraordinary were the mighty deeds God accomplished at the hands of Paul that when face cloths or aprons that touched his skin were applied to the sick, their diseases left them and the evil spirits came out of them.”

Today, God may have plans to heal someone or provide them a much-needed miracle, and He might be planning on doing this through you. Whether you act or fail to act, you may never know how your action or lack of action impacted the other person. 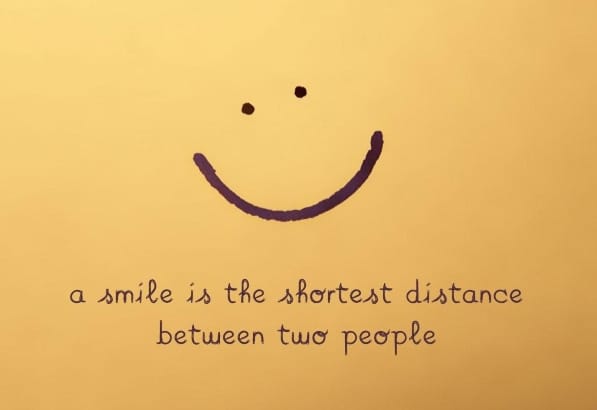 Far too often we wander through life living out the lyrics from the opening song in Les Misérables. Those lyrics are as follows: “Look down, look down, don’t look ’em in the eye.”  Frequently we are unmindful of the needs of others. We sometimes react like the Levite in the Parable of the Good Samaritan found in Luke 10:29-37.  What did the Levite do when he saw the half-dead man along the road? He passed him by after crossing over to the opposite side of the road.

This week I was made aware of a true story and it reminded me of the importance of responding to God’s call to help others. Even an action as small as a smile could literally be a life-saving miracle for someone.

The story was about the Golden Gate Bridge being the world’s leading suicide location. One person’s story really piqued my interest. According to the story, Dr. Jerome Motto, a psychiatrist, had a patient who jumped to his death from the bridge in the mid-seventies.  Dr. Motto went to the man’s apartment after the suicide. The doctor said this. “The guy was in his thirties, lived alone, pretty bare apartment. He’d written a note and left it on his bureau. It said, ‘I’m going to walk to the bridge. If one person smiles at me on the way, I will not jump.”

What a haunting story and tragic outcome. The man encountered no smiles and he leapt to his death.  Would we have smiled if we would have passed this man as he walked to the bridge? Someone’s simple smile could have been this man’s life saving miracle.

A few of the words from one of my favorite songs came to my mind as I read that story. The song is The Servant Song written by Richard Gillard and Betty C. Pulkingham. It contains these lyrics:

Will you let me be your servant.

Let me be as Christ to you.

To let you be my servant, too.

We are pilgrims on a journey.

We are brothers on the road.

We are here to help each other

Walk the mile and bear the load.

I will weep when you are weeping.

When you laugh, I’ll laugh with you.

Till we’ve seen this journey through.

This song points out something very important. Sometimes it is others in need and sometimes it is you and I who are in need. When we are the ones in need, we must be willing to allow others to be Christ for us.

I will close with this important reminder. Let’s never cause someone to lose their miracle because we fail to respond to God’s call! He is counting on us! 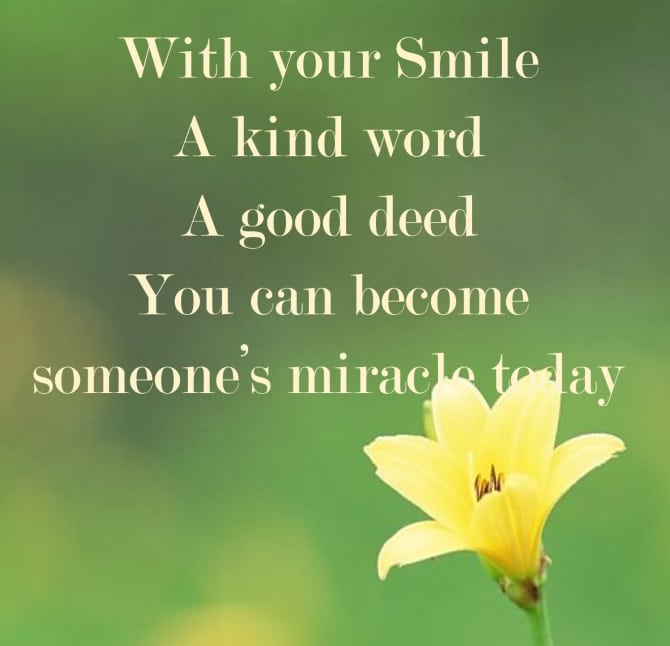 Heavenly Father give me the courage to respond to your call and allow the Christ in me to heal the needs of others. Amen

Don’t forget to mark your calendars