America is at unrest over the recent Supreme Court ruling concerning abortion. As a nation, we are still trying to cope with many issues brought on by the recent pandemic. Violence and mass shootings are on the rise. And for a variety of reasons, mental health problems, for some people, have hit a breaking point. All of these things are in addition to the normal everyday challenges of life. Now, more than ever, we need to cling to the rock of Jesus Christ. I invite you to read more. 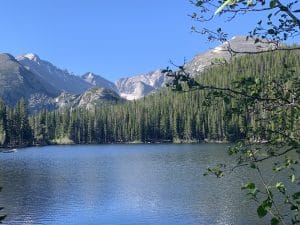 I am writing this week’s message while on vacation at a campground in Estes Park, Colorado. My wife and I have spent this past week here in the Rocky Mountains with friends. As spectacular as Rocky Mountain National Park is, with its snow-covered mountains, breath taking views, and abundant wildlife, it was the special place that we visited just outside the park that inspired this week’s message. I will come back to that place in just a moment.

Everyone who has visited Rocky Mountain National Park knows water plays an essential role in this unique ecosystem. The camper that I am sitting in is nestled directly on the banks of the Big Thompson River. Day and night we can hear the soothing, calming and comforting sound of this fast-flowing river. Of course, water sustains the abundant wildlife population found in the park. The magnificent waterfalls and countless lakes throughout the park offer up spectacular beauty to a steady stream of park visitors. 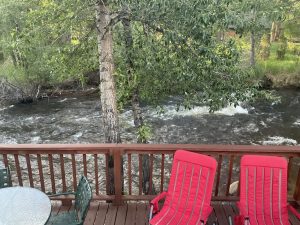 But these same peaceful waters can turn to a destructive force causing catastrophic damage, as was evidenced in the Colorado flood of 2013. On September 11, 2013, a slow-moving cold front stalled over Colorado. Boulder County Colorado received 9 inches of rain on September 12th, and by September 15th, they had received up to 17 inches of rain. The flood waters spread across a range of almost 200 miles.

One of the places impacted by that flood was that special place that I mentioned earlier. This beautiful place that we visited while on our stay here is St. Catherine of Siena Chapel, located on the grounds of a youth camp known as Camp St. Malo in Allenspark, Colorado. This Chapel is also sometimes referred to as the Chapel on the Rock for reason that are evidenced in the picture below. 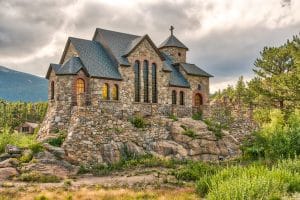 The chapel was built in the 1930s. It was built out of solid rock and nestled on top of a large rock. This site was visited by Pope John Paul II on Aug. 13, 1993, during his trip to Denver for World Youth Day.  Then in 2011, the 60,000 square foot retreat house at Camp St. Malo was totally destroyed by a fire. The church, built out of rock, was spared from the fire. Just two years later, the Colorado flood hit. A five-mile-long land slide crashed down and a massive debris field surrounded the church. Once again, this church built on a rock, was spared from the flood waters and ensuing devastation.

Why am I telling you all of this? Because while visiting this unique place I was struck by the metaphorical significance this church offers us all when confronted by the problems we are facing in the world today. We are awash in the floodwaters of turbulent times. If we want to survive, we must cling ever so tightly to our Savior Jesus Christ. 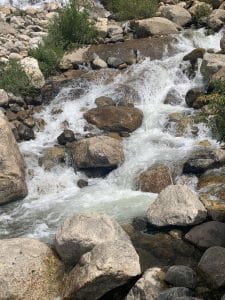 Jesus states the following in Matthew 7:24-25, “Everyone who listens to these words of mine and acts on them will be like a wise man who built his house on rock. The rain fell, the floods came, and the winds blew and buffeted the house. But it did not collapse; it had been set solidly on rock.”

Without a doubt, our time spent in the Rocky Mountains has left a lasting impression on us. We are in awe of God’s created beauty. But this little church, nestled secure on top of a rock, also left an even bigger impression on me. It reinforced the need for all of us to cling tightly to Jesus during times of difficulty and unrest. He alone is the rock of our salvation!

I will close today in prayer with the words of Psalm 18:2-3.

“I love you, LORD, my strength, LORD, my rock, my fortress, my deliverer, My God, my rock of refuge, my shield, my saving horn, my stronghold!” Amen! 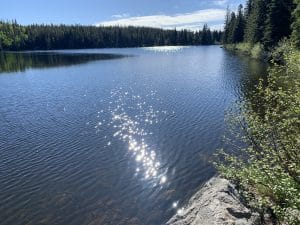 Please take a couple minutes to watch the video about my new book. The book is available on this website and on Amazon. Please be sure to like the video and to leave a review of the book on Amazon after you have read it. Thank you!