Today I plan to take you on a journey from the beginning to the end of the Bible. We will travel from Genesis to Revelation at the speed of light. I will offer up a simplified overview of God’s divine plan. This quick recap will also bring into focus our important role in His plan. Please read more.

The Bible begins with Genesis 1:1-4 telling us that in the beginning God created the heavens and the earth, and the earth was without form or shape, with darkness over the abyss and a mighty wind sweeping over the waters. 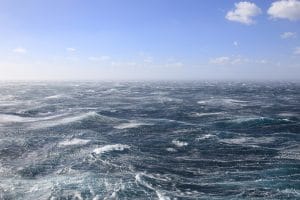 The Hebrew term “tohu va-bohu” was used in Scripture to describe this condition of the earth. It was a place of confusion, a watery place without form, a desolation, a figuratively worthless place. It only became good after God separated light from darkness and eventually brought forth land from the sea thereby creating a place for man to inhabit. Said differently, God brought forth meaning from chaos. Science describes this as life coming forth from primordial ooze.

When man first entered into creation, the world was a good place. Sin had yet to stain God’s masterpiece. But soon, sin would plant deep roots and spread throughout the world like Kudzu on a southern mountainside.  The entire Bible represents a tug a war between good and evil. Throughout the Biblical narrative, God continually intervened to restore His masterpiece only to see mankind lay it to waste again through sin.

This back-and-forth struggle continued from Adam and Eve until Jesus’ victory over death on the cross. Sadly, even after Jesus’ death and resurrection, mankind persisted in sinfulness. This tug-a-war not only continues to exists in the world at large, but it also exists in each one of our individual lives.

Although God continually pulls us out of the sinful slop of the toho va-bohu we repeatedly return to it over and over again. Will this cycle ever end? Does good ever win out once and for all over evil? The answer is a resounding yes. 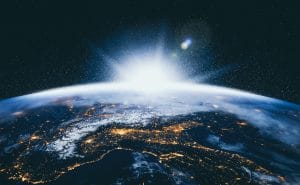 Take a look at this passage in Revelation 21:1. It states, “Then I saw a new heaven and a new earth. The former heaven and the former earth had passed away, and the sea was no more.” Notice that in the end, the sea no longer exists. This metaphoric language tells us that at the second coming of Jesus Christ, the confusion and chaos of tohu va-bohu comes to an end. Good triumphs over evil, and the earth is restored to a new earth without sin.

So why is this so important to you and me? Because until the time of the new earth, you and I have an important part to play. Hopefully we will carry out our role and God’s mission.

Tohu va-bohu is symbolized by the turbulence of the sea. Water can be a highly destructive force, as was evidenced in the recent floods in Yellowstone. We also saw it in the story of Noah. The ark was tossed about in the raging sea until the reappearance of dry land. 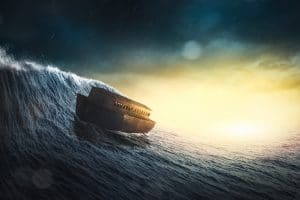 Imagine a world without land, one with nothing but turbulent raging seas. This is the condition of the world at the beginning of the Bible. But the final book of the Bible tells us,  “the seas were no more.” This allegorical depiction describes the journey of man from a world of sin, to a world of eternal happiness and peace. One day the storms and raging seas will cease. One day our battle against temptation and sin will be over.

Sadly, the book of Revelation is often misunderstood and mischaracterized as an apocalyptic display of an angry God. Nothing could be further from the truth. This book is a book of hope and joy. Clearly it speaks of the cleansing process of evil from the world but only for God’s purpose of bringing forth the total restoration of a new earth.

When will Jesus return? Only our Heavenly Father knows. Until He does, God’s people will go through life like a small boat being tossed in a raging tempest, constantly searching for a safe harbor. Jesus is that port in the storm, for those who put their faith in Him. Our role is to be the lighthouse that guides people to Him.

Until the return of our Savior, tohu va-bohu will attempt to reclaim the world. One day, Christ will rule forever in a new earth devoid of sin and pain. Until then, we need to hold fast to the rock of Jesus Christ when the flood waters re-emerge, and we must constantly guide others to the safety of our Lord. 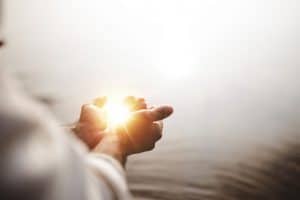 Heavenly Father, thank you for rescuing us from the torrent of the abyss. Thank you for your Son Jesus Christ. He alone can pull me to safety in the flood waters of sin. I look forward with hope to that time when the seas will be no more. Amen!

Please take a couple minutes to watch the video about my new book. The book is available on this website and on Amazon. Please be sure to like the video and to leave a review of the book on Amazon after you have read it. Thank you!