Do you know what “divide et impera” means? You should. We have seen it played out these past few months in the United States and it is on full display around the world. Niccolò Machiavelli wrote about it in 1513 resulting in the term Machiavellian becoming synonymous with deceit and deviousness. Julius Caesar employed this technique as did Napoleon. How is “divide et impera” impacting you and how is it impacting our world? Please read more. 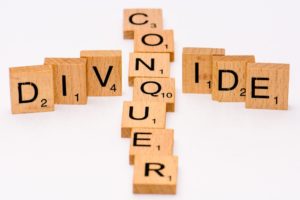 According to Wikipedia, divide et impera means divide and rule or divide and conquer. In politics and sociology, it means gaining and maintaining power by breaking up larger concentrations of power into pieces that individually have less power than the one implementing the strategy. Spiritually speaking, it’s highly destructive.

The true author of this strategy is the devil. The word “devil” traces back to the Latin and Greek words “diabolus,” which literally means slanderer. The roots of the word are “dia” meaning across and “bolos” meaning “who throws.” In other words, the devil is a slanderer who throws division across the world. He is the author of distrust; he polarizes one group against another and ruptures relationships. Does this sound familiar? Take a look at this list:

Senate against House of Representatives

I am sure you get my point. This list goes on and on.

Need I provide any more evidence of the hideous divisiveness of the evil one in our lives? As Christians, we must ceaselessly work to end division and build unity among ourselves, within the church and around the world. We need to stop the fighting. 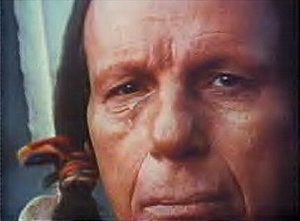 Anyone old enough to remember, likely recalls the famous public service commercial from 1971. As the Indian paddles his canoe through pristine waters, he is surrounded by litter. He pulls his boat onto a bank, it is strewn with litter from the freeway. As he stands there, someone flings a bag of trash from a passing car. A single tear rolls down his cheek. At that, the narrator says, “People start pollution. People can stop it.”

Divisiveness is the liter of the modern world. It’s strewn everywhere. I am reminded of Jesus’ return to Jerusalem. Luke 19:41 states, “As he drew near, he saw the city and wept over it.”  As I ponder the world’s divisiveness, I wonder if Jesus is weeping again. “People started this division. Christians can stop it.”

In order for us to have any impact on reducing division and building unity in the world, we must first recognize the division within ourselves. Paul famously points out this division in Romans 7:18-19, “For I know that good does not dwell in me, that is, in my flesh. The willing is ready at hand but doing the good is not. For I do not do the good I want, but I do the evil I do not want.” 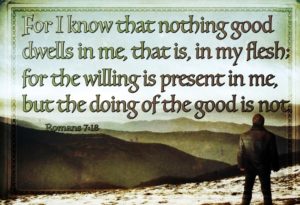 The terms “my flesh” or “the flesh” which Paul uses here do not mean our flesh and bones, it means the parts of us that are alienated from God. He is referring to the rebellious, unruly, and obstinate parts of our life. These must change.

Let’s take a closer look at the devil’s strategy. Included in an even longer list in  Galatians 5:19-21, Paul tells us the works of the flesh include hatred, rivalry, jealousy, outbursts of fury, acts of selfishness, dissensions, factions, and occasions of envy. We have seen a lot of this on the news recently.

My friends, we must first deal with our own inner divisiveness and our hatreds, rivalries, jealousies, outbursts, acts of selfishness and envies, so that collectively as Christians we can bring about an end to the many divisions in the world. In Romans 8:14, Paul gives us a warning, but he also concludes with hope and encouragement. He states, “For if you live according to the flesh, you will die, but if by the spirit you put to death the deeds of the body, you will live.” 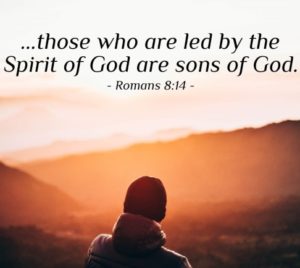 Both in our own life and in the world, the devil is employing his DIVIDE ET IMPERA strategy. He wants to divide and conquer us. With Jesus in our hearts, let’s re-commit ourselves to becoming agents of change in this world. Let’s become agents of peace. What things are you doing, and what words are you saying that cause division? We must start by changing ourselves. If each one of us does our part to change, this world will become a much better and more peaceful place to live.

Perhaps it was all of this division that caused Jesus to pray these words to His Father, “I do not ask that you take them out of the world but that you keep them from the evil one.” (John 17:15) It may also be why He taught us to pray “but deliver us from the evil one” (Matthew 6:13).

I appeal to you my brothers and sisters, in the name of Jesus Christ, that we bring an end to the division among us, and that we as Christians, work to become united in mind and heart.

Take a moment and enjoy this song and music video.