Much has been written about the impact of the clothes we all wear. Clearly clothes do make a statement. Psychological reports seem to indicate that the clothes we wear even impact how we feel about ourselves. If a person normally doesn’t wear a suit, and then one day wears one, they are likely to feel differently about themselves. On one hand, someone putting on the suit might feel a sense of power, new self-worth and appreciation, on the other hand another person wearing this suit might feel like a phony.

In Romans 13:14, Paul tells us to “clothe ourselves in Christ“. He also implores us to “conduct ourselves properly.” We all know that we don’t always abide by his admonition. Sadly, sin works like a moth eating away at the clothing of Christ that we our attempting to wear. Sin entices us to walk away from our Heavenly Father in much the same way the prodigal son walked away from his father. After squandering his wealth he hired himself out as a servant. In Biblical times, a sign of servitude was to be shoeless. Eventually the son came to his senses; hungry, no doubt shoeless and wearing tattered clothing he decided to make the journey home.

Have our sins left us shoeless and in shabby clothes? If so, there is some good news. Read on. 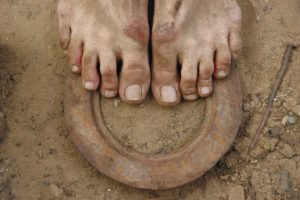 Certain types of clothes carry a symbolic meaning. My wife and daughter both work in a hospital and therefore wear scrubs. It is easy to recognize someone who is wearing scrubs as someone involved in the medical profession. Specific uniforms might tell us that a person is in the military or in law enforcement. We can learn something about someone just by what they are wearing.

It is no longer just about the clothes themselves, but now it is about what designer or celebrity has their name on the clothing. For proof of this, just look at the popularity of Michael Jordan’s shoes, or Tommy Hilfiger’s clothes.

Clothes that make a statement are nothing new. In ancient time, the clothes people wore, or in some cases didn’t wear, told you something important about the status of that person. For example, slaves and servants were very often deprived of shoes. Perhaps Mark Twain knew that the absence of certain clothing was a social statement when he left us with this humorous quote: “Clothes make the man. Naked people have little or no influence on society.” 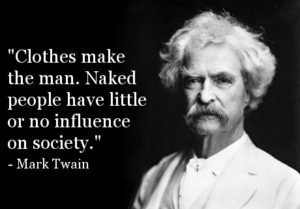 At the time of Jesus, purple clothing signified royalty and wearing a ring was a sign of importance. I provide all of this as a backdrop for the point I want to make today.

The story of the Prodigal Son is very well known. We know it as a story of the father’s forgiveness. Jesus had many other important points included in this parable.

The prodigal was happy just to go home. He was hungry. He knew his father’s servants were eating better than he was. He had his humble contrition speech all worked out. He must have been quite surprised when his father ran out to greet him. He was most likely more surprised by what happened next. We often overlook this. Luke 15:22: states: “But his father ordered his servants, ‘Quickly bring the finest robe and put it on him; put a ring on his finger and sandals on his feet.” Why did Jesus add this to His parable?

Jesus gave us these powerful words to illustrate a point. Yes, the father forgave the son, but by putting the robe on his son he conveyed the message to him that his place in the family was restored. The ring symbolized his father’s affection and the new sandals made it clear to his son that he was no longer a slave. 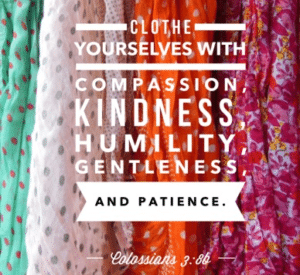 My dear friends when we too turn away from our sins and return home to seek our Heavenly Father’s forgiveness, not only will he forgive us, but He will be ready to restore our place among the family of believers and He will have our new shoes waiting for us to symbolize that we are no longer slaves to our sin.

Let’s make a new fashion statement. JESUS is the best designer name of all time to put on our shoes. Let’s make today the day that we turn back to the Father, seek His forgiveness and ask for a new pair of shoes.

Most gracious and Heavenly Father, thank you so much for pouring your mercy out on me and thank you also for my new shoes that restore to freedom and release me from the bondage of my sins, amen. 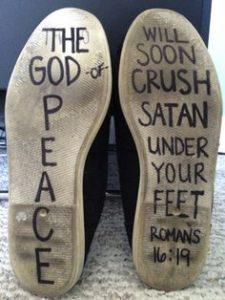 Latest posts by Brian Pusateri (see all)
← Divided We FallYou’ve Got Mail, Or Do You? →