The leader of the country sat proudly in the ornate room set aside for visiting dignitaries. The fire dancing on the logs in the fireplace flickered off the walls as the heat from the fire warmed the room. A visiting evangelist and devout man of God handed the leader a copy of God’s word. This head of state proceeded to cut out selective verses of God’s Word with which he disagreed and throw them in the fire. Who was this head of state and what does his actions have to do with you?  Click below to find out.

The idea of any head of state or national leader willfully and maliciously cutting up God’s Word and throwing it in a fire is an offense to our Christian sensibilities. Who would do such a thing? You might be surprised. 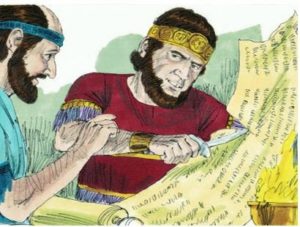 The person to whom I was referring was Jehoiakim who was King of Judah. In  Jeremiah 36:1-32, Jeremiah sends Baruch, his scribe, to King Jehoiakim with a scroll containing a message from God. The King had one of his servants read the scroll. Each time the servant finished reading three or four columns, the king would cut those verses out of the scroll and throw them into the fire. He did so until the entire scroll was consumed by fire.

God did not take lightly to the kings actions. He responded by saying, “No descendant of his shall sit on David’s throne; his corpse shall be thrown out, exposed to heat by day, frost by night.”

Jeremiah’s message causes me to wonder how God will react when each of us pull out our scissors and do the same thing as Jehoiakim by cutting out the verses in the Bible that we disagree with. Most of us will never throw all of God’s Word in the fire like Jehoiakim eventually did, but I suspect that there is not one among us who hasn’t at least cut out a few of our least favorite verses and figuratively burned them in the fireplace. 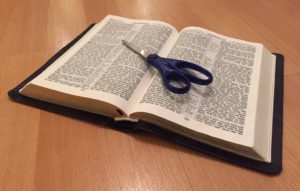 What exactly do I mean by this “cut and burn” analogy? I mean that most Christians tend to selectively disregard one or another of God’s commands. Are you willing to admit that there are some of God’s commands that you sometimes disregard? I hate to admit it, but I know I am guilty of this.

This cut and burn, selective Christianity, evolves into its own pick and choose religion. This is nothing new. It has been going on throughout all of Christianity. The word heresy comes to us from the Greek word “hairetikos” meaning “choice.” Heresies generally contain some element of truth while purposefully choosing to omit other elements of truth, thereby distorting the true Word of God. Sadly, most of us edit out those parts of the Bible that we disagree with so that we can justify some action of ours that otherwise would be objectionable to God.

On a macro level, we see cut and burn Christianity in the way modern Christians have expanded the meaning of marriage and the acceptance of divorce. We see it at work when we ignore the reality that God created human beings as only male and female. It is evident in our modern acceptance of accumulating material things even though the Bible gives us ample warning against doing so. We see it when we willfully disregard God’s command to give a tenth of our time, talent, and treasure back to Him. 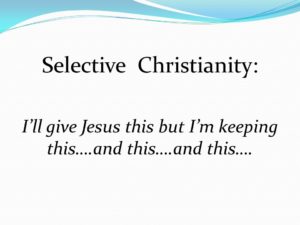 Have we, as modern Christians, chopped the Bible into pieces in order to accept abortion on demand or when we embrace the death penalty? Perhaps we have cut out the section of the Bible about having false God’s when we emphasize patriotism over Christian values, or when we allow our political parties and platforms rather than allowing God’s Word to govern the way we think and the way we treat others. The list of ways in which we scissor cut the Bible is endless.

My goal today was simple. I wanted us all to stop and think about what parts of the Bible we personally like to cut and burn. Let’s face it, we all do it.

Jesus tells us in John 14:15, “If you love me, you will keep my commandments.” We must admit that we all fall short of keeping all of God’s commands. Joshua exhorted the people of his time to choose who they would serve. In Joshua 24:15 Joshua states, “As for me and my household, we will serve the LORD.”  I hope you and I can say the same thing. 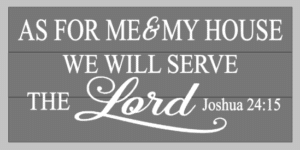 Heavenly Father, help me to put my scissors away and say to you, “Not my will but yours be done.” Help me to be more obedient to the teachings contained in your Holy Scriptures. Amen!