This past Sunday’s readings at my church touched on the topics of gender, marriage, and divorce. These often-controversial topics, share something in common. They are all public issues. The stark difference in the way Christians react to public verses private sin reveals a great deal about our human nature.  Please read more… 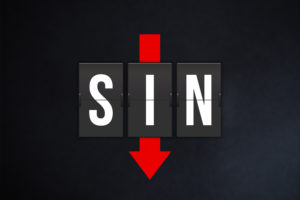 Sunday’s readings from Genesis chapter two and Mark’s Gospel, chapter ten speak to a few of the important issues of our time. These readings caused me to reflect on our cultural views regarding gender, marriage, and divorce. I think we love to point out the public sins of others to draw attention away from our own private sinfulness.

In 1850, Nathaniel Hawthorne wrote the book, THE SCARLET LETTER. He set forth the conflict between public and private sin. His book not only draws attention to hypocrisy, but it also draws attention to the destructive nature of hidden sin and guilt.

Set in Boston in the seventeenth century, Hester Prynne conceives a daughter through an affair with minister Arthur Dimmesdale.  Prynne sought to create a new life of repentance and dignity with her daughter, but those efforts were thwarted when she was found guilty of adultery. For her punishment, she was forced to wear a scarlet “A” on her dress to indicate she was an adulterer. She had to stand on a scaffold for three hours and be exposed to public humiliation. Dimmesdale on the other hand, vacillated between his hunger to cleanse his soul through confession and his Puritan zeal and need to keep his sin secret. 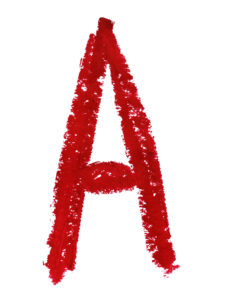 We are still living in a time when someone’s public sins are shamed. Sins committed in secret seem to avoid the condemnation of others. The Bible speaks to this issue when it warns us to first worry about the beam in our own eye before worrying about the splinter in our brother’s eye. And when Jesus confronted the crowd that was about to stone the woman caught in adultery, he famously said, “Let the one among you who is without sin be the first to throw a stone at her.”

Most Christians believe the Bible when it states that marriage is to be between one man and one woman. They also believe that the Bible is explicit that there are only two genders, male and female. Finally, many still believe it is sinful to divorce and remarry. Other Christians disagree. Stepping away from these highly divisive issues for just a moment, can we at least all agree that every single one of us is a sinner? Do we all agree that Romans 3:23 makes that clear?

Sadly, when someone’s sins are made public, their sin becomes scandalous and they become fodder for gossip. Non-Christians love to feed on stories that depict fallen Christians and worse yet, many Christians seem hell bent to throw their brother or sister caught in sin, under the bus. Woe to that poor individual whose sexual sins become known to others. It certainly spices up the rumor mill. 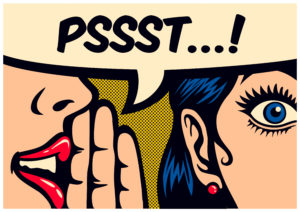 We have all heard gossip. “Did you know that Charlie Smith’s 15-year-old daughter is pregnant?” “Someone told me Johnny Brown now identifies as a female and is seeking a sex change operation.” “Did you know that Sally, who is divorced, is planning to remarry?” “Did you know that Steve and Michelle’s gay son is getting married?” Salacious gossip and public shaming seem to be our national pastime.

Hawthorne presents the drastic difference between the inward and outward lives of everyone in the story. The Scarlet Letter points out that society would be much better if we could eliminate hypocrisy. It points out our need to be honest and to bring our inward self and outward self into alignment. 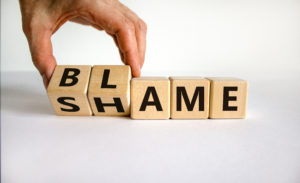 Guilt and shame can destroy us from within, especially when we publicly castigate others while hiding our own sins in secret. In the book, Arthur Dimmesdale was tortured by his guilt. He was unwilling to admit his own sin of adultery, yet he was more than willing to allow Hester to be shamed. His hypocrisy was destroying him. Hester admitted her sin and bravely wore the scarlet letter A. By doing so, her sin lost its ability to destroy her spirit.

Proverbs 13:3 says, “Those who guard their mouths preserve themselves; those who open wide their lips bring ruin.” And James 5:9 says, “Do not complain, brothers, about one another, that you may not be judged. Behold, the Judge is standing before the gates.”

Heaven forbid that all of our sins ever become public. The next time any of us encounters someone living with gender identity issues, divorce and remarriage issues, or someone in a gay marriage, let’s first remember our own sins, and realize that just because their sins are different from ours and more public than ours, doesn’t make their sins worse than ours in the eyes of God. All sin offends God. 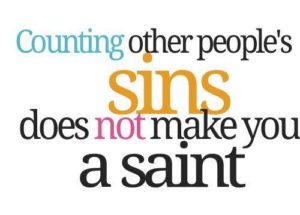 Heavenly Father, have mercy on me a sinner. Help me to always treat others in their sinfulness the way I want you to treat me with my sinfulness. Help my actions to be a shining example of Christ-like love in the world. Amen!