A gaunt disheveled man laid all alone in the alley. The smell of the nearby restaurants wafted through the air. The food’s aroma caused his stomach to groan. It had been days since he had eaten. His hunger pains forced him up off the pavement. He stumbled over to a dumpster hoping to find something eatable. Find out what happened to him and learn how it impacts you. Please read more… 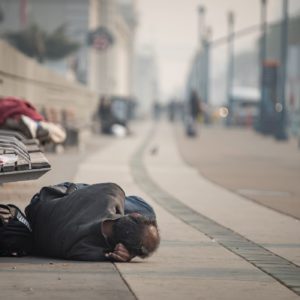 Two hours after eating the rancid chicken from the fly infested dumpster, the man began to vomit uncontrollably. His body felt weak and his face felt paralyzed. Soon he passed out. A restaurant worker, taking trash out, spotted the familiar man lying listless in the alley. He called 911. When the man regained consciousness, he was in the hospital.

The doctor told him that he had developed a severe case of botulism. He asked him what he had recently eaten. The emaciated man explained that he was homeless and only had access to food scraps found in dumpsters.

The doctor warned him that food found in a dumpster can be poisonous. “It is almost always crawling with insects, and often covered in rodent droppings”, he explained. He continued, “Even foods like meat, milk, and other dairy products, which look nourishing, can make you ill. If they have been out in the hot dumpster for only a few hours, the bacteria will thrive on these foods, and that bacteria can lead to a variety of illnesses including salmonella poisoning, or in your case, it led to botulism.” The doctor told him that without treatment he could die.

My friends, I wrote the story above to make a point. Eating garbage is physically bad for us! It can lead to severe illness, paralysis, and even death. The same is true in our spiritual lives. Well-known Christian author, Henri Nouwen, once said, “Don’t feed your soul garbage. Your soul is like a tender little child. Don’t feed it garbage. Rather, give your soul, your mind and attitude the best food to grow up on.” 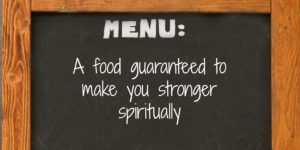 What is on your regular menu? Is it filled with social media, television shows, and video games? Do you have a steady diet of daily news filled with endless stories of who is killing who? There is nothing inherently wrong with television or with the internet. The question is what content are we consuming. How much of what we ingest contains Christian nutritional values?

Perhaps, spiritually speaking, we are devouring stuff that is contaminated with bacteria and crawling with insects. Left unchecked, it could cause us to develop a severe case of “spiritual botulism.”

Dumpster diving was once an activity carried out by only the poorest of the poor. Many of these people also exhibited signs of mental illness. Sadly, with all of the wealth in the world, there are still too many people who are left to live this way. As Christians, this should concern us deeply but that is a topic for another time.

Nowadays, dumpster diving has evolved into a trendy activity for those who call themselves “Freegans.” In an attempt to save the planet from waste, these often young college educated, Freegans purposely dig through dumpsters looking for discarded prized items such as king crab legs, fancy cheeses, dark chocolate, or pizza. By eating these discarded foods from a dumpster, these people are risking their health and even their life. 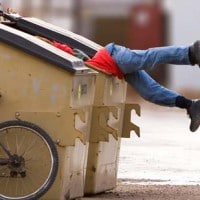 Sadly, we Christians sometimes purposely consume things on tv or on the internet that endanger our spiritual health. If we persist in our dangerous diets, they can eventually lead to our spiritual death.

Today, television, and to an even greater extent the internet, offer a smorgasbord of good Christian programing. We can dine on the abundance of articles and videos by renowned Christian writers and speakers. Are any of these a regular part of our diet? When was the last time you consumed some of these spiritual health foods?  There is a spiritual banquet of good Christian books available to feast on. Are we consuming the recommended daily allowance of these healthy spiritual vitamins? If not, why not? 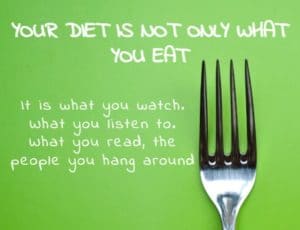 Good and Gracious Father you have blessed me with an abundance of spiritual foods to dine on. More than ever before I have access to books, podcasts, YouTube videos, television shows, and websites all packed with spiritual nutrients designed to strengthen my faith. Far too often, however, I prefer instead to eat the trashy stuff with no spiritual value. Through your Holy Spirit, guide me towards a nourishing daily diet. Draw me always closer to You until that day that I dine with You at your Heavenly banquet. Amen.

Take a few extra minutes and share the resources you use to grow your faith. What are you consuming on television, internet, podcasts or in books, for your spiritual enrichment? There is so much good Christian content available today. Please let us know what you turn for good Cristian “food”. Everyone will benefit.