Parents, friends and other relatives often return from their vacations bearing gifts for those close to them who didn’t make the trip. Today is no different. I have returned from my three week getaway with a message for all of you from my travels.

As many of you know, I was away for the last three weeks. My wife and I were celebrating what we were calling our 60/40 getaway. We both turn 60 this year and we celebrated our 40th anniversary in December last year. With my Multiple Sclerosis progressing we decided to check off one bucket list item. I have always wanted to go to Bora Bora, especially after watching the movie South Pacific years ago. So off we went on our trip and today’s message was inspired by Easter Sunday mass in Tahiti. 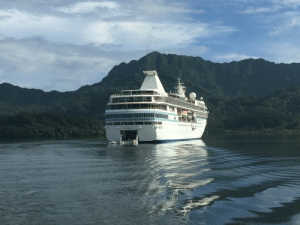 We arrived in Papeete, Tahiti on Thursday, March 30th late, dark, and in the rain. It rained Thursday night, all day Friday and it was raining when we boarded our ship for a 14 day cruise in the islands of French Polynesia.

Tahiti (/təˈhiːti/; French pronunciation: [ta.iti]) is the largest island in French Polynesia, which is composed of 118 geographically dispersed islands and atolls stretching over an expanse of more than 1,200 miles in the South Pacific Ocean. Our 14 day cruise itinerary included many of these islands. The first Tahitians arrived from Southeast Asia in about 200 BC but the first Christian missionaries didn’t arrive until 1797.

The cruise itself was great fun and the sun did shine down on most of our cruising days; the trip was very relaxing and we saw many interesting historical sites. Some of the historical sites were places where the original tribes performed human sacrifices. Young men from one tribe were captured and killed in a spiritual service to appease the gods of the captures. Other than these few gruesome locations, God’s beauty was on high definition display everywhere else on these islands. 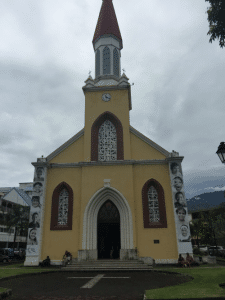 We arrived back in Papeete and disembarked on Saturday April 15th. Guess what, it was raining again in Tahiti. We had yet to see Tahiti in the sunshine. After disembarking we rented a car and set off to find Notre Dame Cathedral and determine the mass times for the following day, Easter Sunday.

Papeete is a bustling little city with too many one way streets with lots of small cars and scooters. Getting to the church was difficult but we found it, and it was a beautiful place but with our hotel many miles outside of Papeete, we decided to find a closer church to attend on Easter. The Holy Spirit led us to a great place.

I awoke early on Easter Sunday to the sound of the roosters not far from our hotel. My wife was sound asleep. I walked out of my room and was greeted by a beautiful sunny morning.  With coffee in hand, I walked down to the beach to think and pray. I had a stunning view of the island of Mo’orea. I gave thanks to God for this unique Easter morning.

Before I knew it, it was time to go back to the room, wake up my wife and get ready for mass. We left in plenty of time not knowing how difficult it might be to get a seat on Easter. 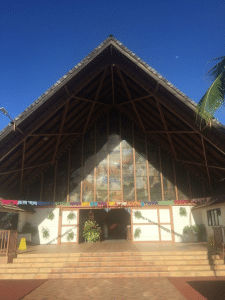 Easter service was at Paroisse Saint Etienne or in English, St. Stephen Parish. Being that we were in French Polynesia, the mass was in French. I was certain that what we learned in our French class over 40 years ago was long since forgotten. It was reassuring to know that the mass is essentially the same everywhere in the world even if the language is different. I knew we could follow along. I grew up singing “Jesus Christ is Risen Today” so I knew all would be fine when I saw these lyrics in the first song, “Le Christ Est Ressuscité Alléluia, Alléluia”

Several hundred people filled the pews of this beautiful church, most dressed in all white, some with the traditional floral wreath in their hair. The choir was large, maybe 50 or more, and their voices were angelic. The musical selection was contemporary and upbeat. A few songs were sung in the native Tahitian language. We felt at home among these Christian brothers and sisters.

Although in a foreign language, this Easter service was all so familiar. The familiar scent of incense wafting in the air tickled my nose even in this open air place of worship. Candles adorned the altar. Following the readings and homily four children were to be baptized. Called by name, claimed for Christ with the use of the symbols of water, oil, candle light and white garments each was anointed priest, prophet, and king.

The service continued with the very familiar consecration of bread and wine, with the joining of our hands with theirs as we recited the Our Father together, the offering of peace, communion, the final prayer and the blessing and sending forth of the people.

My mind drifted to think about how far these islands had progressed from those early pagan days of human sacrifices. On this special day, the people were celebrating Jesus Christ’s victory over death. He had sacrificed His life so that all who believed in Him could have eternal life and three days later He rose from the dead.

For a few moments I pondered the words of the great commission from Mathew 28: 19-20 “Go, therefore, and make disciples of all nations, baptizing them in the name of the Father, and of the Son, and of the Holy Spirit, teaching them to observe all that I have commanded you.”  Tahiti is nearly halfway around the earth, 11,421 miles from Jerusalem. 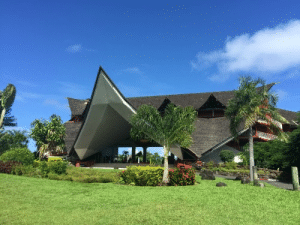 On this day, over 2000 years after Christ’s resurrection I smiled and praised God that His message had in deed made it to the far corners of the earth. But my excitement was tempered by the reality that although His message had made it around the earth, it had yet to travel the short distance from the brain to the heart of so many people.

The missionaries that went before us have spread the good news around the world, now it is up to us to spread that news of Jesus Christ and His mercy and love to all of the people in these nations. The world is still filled with war, hatred, famine and injustice. There is much yet to be done.

As we go forth with the joy of Easter Sunday in our hearts, we must ask ourselves this question: can our Lord who gave His life for us, now count on us to do our part to build His Kingdom?

Refreshed by my French Polynesian getaway, I wish you all JOYEUSES PÂQUES (Happy Easter)!

I want to extend my thanks to Joe Galloway, Pastor Lee Norris and Bob Lange who filled in for me while I was away!