This past weekend I had the opportunity to participate on the team for a men’s three day Christian retreat known as Cursillo. Nineteen men attended this experience as candidates. Each man came to the weekend with their own unique past. When they arrived Thursday night some men were walking a closer walk with the Lord than others were. All were seeking a deep encounter with Christ.

On the weekend, these men were presented a series of fifteen talks, some by laymen and others by clergy. These men were all given the same Christian tools to help them remain close to the Lord for the rest of their life. Each man goes forth from these weekends with the same exact tools and having heard the same exact talks. History, however, tells us that one year from now some of these men will have strayed from the message that they heard. They will quit using the tools that were presented to them and some will no longer be meeting weekly in communion with other Christian men. To sum it up, a year from now some will likely be lost. Have you ever strayed? What path are you on right now?

Each morning of the weekend began with prayer and a meditation. One of the morning meditations captured my attention and the Holy Spirit prompted me to write about it today. 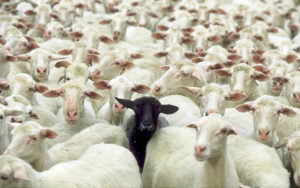 Have you ever noticed how two people given the same opportunities in life can end up with radically different outcomes? One might achieve great success while another might fall off the path and their life end in shambles. This even happens in our families. One child in the family might go astray and have a very difficult path in life. In the secular world, this person might be referred to as the black sheep of the family. In Biblical terms, they would just be known as the lost sheep.

Let’s look at another example of a lost sheep. Have you ever considered the fact that both Peter and Judas were friends of Jesus? Jesus called them both to be among His twelve apostles. They both spent three years with Jesus. They both learned from Jesus. Jesus loved them both. However, in time, Peter denied Jesus: “I do not know the man” Matt: 26: 69-75 and Judas betrayed him: “The man I shall kiss is the one; arrest him” Matt: 26: 48-50. It is what they did next that intrigued me.

Jesus was on His way to the cross when Peter denied Him three times. Now fast forward to after the resurrection. In John’s Gospel 21:15-19 we have the opportunity to see how Peter reacts to Jesus when Jesus confronts him. Three times Jesus asks Peter if he loves Him. Each time Peter responds by saying yes. His third response is emphatic “Lord, you know everything; you know that I love you.” Peter was remorseful for having denied his savior and this time he pledges his love and chooses to follow Christ. 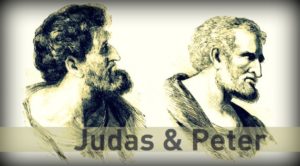 Contrast Peter’s story to that of Judas. We are told in Matt 27:3 that Judas, much like Peter, regretted his actions. “Then Judas, his betrayer, seeing that Jesus had been condemned, deeply regretted what he had done.” But Judas’ pride, ego and shame got the best of him. Unlike Peter, Judas was unable to return to Jesus to seek forgiveness. Perhaps it was because Judas could not forgive himself. In the end we read this in Matt 27:5 “Flinging the money into the temple, he departed and went off and hanged himself.”

After Peter’s heart felt repentance and his pledge of love for the Lord, “Jesus said to him, “Feed my sheep.” Jesus later said “Follow me” 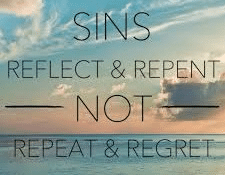 Notice the two vastly different outcomes. Both men regretted their actions, Peter repented, Judas hanged himself. Not only was Peter forgiven, he was commissioned to be a fisher of men and he spent the rest of his life doing just that. He eventually gave his life in service to his Lord.

Similarly, God has given us everything we need to have eternal life, however, at some point we all betray or deny Christ either in our words, our actions or both. We all have sin in our life. As we prepare ourselves for Easter, perhaps we can reflect on our own response. Knowing that we have sin in our life, will we choose to repent, change our way of life and follow the Lord or like Judas, will our pride get in our way and will we fail to repent, fail to turn away from our sin and in time will our continued sinfulness lead to our spiritual death?

We have a choice. Do our actions reflect a decision like Peter to follow Christ, or judging from our way of life, are we more like Judas choosing spiritual death? My fervent prayer is that all of the men on the weekend will choose to remain in Christ. I pray the same for you.

As always, I love to read your comments below as well as hear from you personally by clicking here. Are you still doing your Lenten exercise? Click here if you need a refresher.

Latest posts by Brian Pusateri (see all)
← Does Truth Matter?Shame Versus Guilt →