The accident took place not long before her senior picture day. A beautiful young girl on the high school softball team was struck by a pitch while catching during a game. The fast-pitched ball glanced off her glove and struck her at the bridge of her nose near her eyebrow. It cut to the bone. Blood gushed everywhere. She was rushed to the hospital. Discover the nexus between her story and your spiritual life. Please read more. 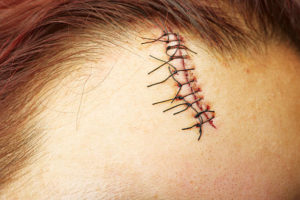 That young girl is now 37. She happens to be my daughter. She assists me in this ministry. She adds the pictures that make these 4th Day Letters looks nice.

Now back to her story. We got our daughter top-notch medical care. In the emergency room, we insisted on a facial surgeon. He did everything possible to minimize scaring. She left the hospital that day with stitches in the middle of her forehead and two black eyes. She of course, was worried about her senior class picture.

It has been 20 years since that event. Her wounds have long since healed. Makeup successfully covered the wound in her class picture but guess what, her scar still remains to this day.

Allow me to tell you yet another story before making today’s point.  A number of years ago, a businessman, wearing a brand-new white dress shirt, stopped at Dunkin Donuts before work. He accidentally dropped his chocolate covered Boston Cream donut on his shirt. The next day, his wife sent it to the dry cleaner. It came back looking brand new. By the way, I was the clumsy guy with the chocolate all over his shirt. 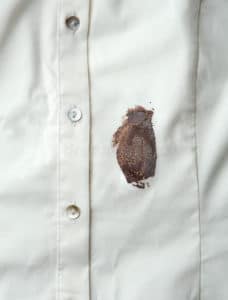 Now, with both of these stories as our backdrop, let’s turn our attention to sin. When we sin, and we seek God’s forgiveness, which of the two stories is more analogous to the impact of sin. After God forgives our sin,  is everything as if it never happened, like my shirt coming back from the cleaners, or instead is it more like the lasting scar after my daughters softball accident?

If you answered the later, you are correct.  Sin has consequences. Long after God heals the wounds of our sins, the scars still remain. Clearly God’s mercy can restore us and assure our eternal life, but on this side of judgement day, we will likely experience the negative consequences of our sins. How is your sin impacting your life right now? How is it impacting others?

With some sins it is much easier to see the lasting scars. Let’s look at a few examples.

If someone murders somebody and later seeks God’s forgiveness, their sins are forgiven. The scars of their sin, however, are ongoing. They spend life in prison and the family of the one who was murdered suffers the permanent loss of their loved one. 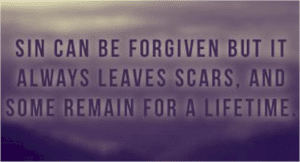 When someone commits adultery and later seeks God’s forgiveness, their sin is forgiven but many scars remain. Their spouse is scarred with the lasting memories of the infidelity, the person with whom they had the affair is hurt, and if a divorce ensues, children can be scarred too.

Gossip has sometimes been known as verbal murder. The Bible tells us, “By a word the impious ruin their neighbors…”  If a gossiper seeks forgiveness, God readily offers it. Unfortunately, the scars from their words can do great damage. We see this on social media daily.

Even when someone who molests a child and later seeks forgiveness, God does not withhold His mercy. But the one who was molested will be forced to live a lifetime with the scars of that sin. And the one who did the molesting must live with the ongoing knowledge of the harm they caused.

When people engage in promiscuous premarital sexual activity, they can seek, and receive God’s forgiveness. But the scars of their activity can result in lasting scars of regret or in some cases scars of an unwanted pregnancy. 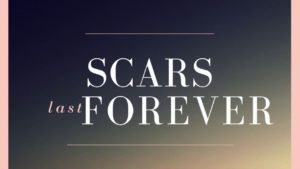 So, what can be done about the scars of our past sins? The good news is that God can work through them for good. We must keep in mind, that even after Jesus rose from the dead, His glorified body still showed the scars on His hands, feet, and side. If we unite our scars with His scars, good things can ultimately come out of seemingly horrible circumstances.

Therefore, if you are carrying around the scars of your own past sins or scars caused by someone who sinned against you and caused you harm, you can find lasting peace by laying them down at the feet of our savior Jesus Christ. Jesus’ scars validated His resurrection. He was crucified before He was resurrected. He is our wounded healer. We too can become wounded healers. We can’t redo our past, but we can allow God to redirect our future. We can pray and ask God to use our scars to help us heal the scars of others. 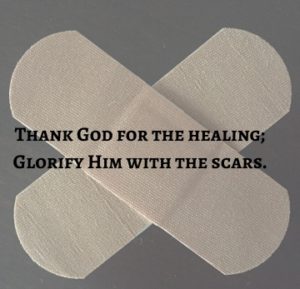 Heavenly Father, your Word assures us that in eternity our sins that are now like scarlet, will be made white as snow; and those that are red like crimson, will become white as wool. But now, on this side of death we live with the scars of our sins. Help us to use those scars for our own good and the good of others. Amen!