In previous emails I have written extensively on the importance of living out our lives in small groups of committed Christians and the importance of spending time every week discussing our prayer life, our study ofboth ourselves and God and our evangelical action. However, today I want to borrow from some musical classics to bring emphasis to the importance of Christian friendship and to the importance of allowing others to encounter the Christ that is in us. If you have been reading my 4thdayletters for very long you know how much I love music and how I find life’s lessons contained in lyrics. So today be prepared to tap your toe and reminisce with this music from the sixties and seventies as we explore an important message. 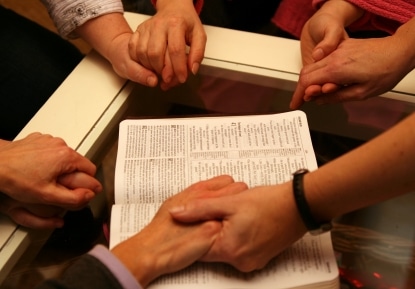 On our journey of life we all encounter times when we have burdens that weigh us down. Sometimes we are not willing to be open and honest with others that we have struggles. The sooner we can remove our pride and confide in one another that we need some help, the sooner we can overcome our struggles. One key element to the success of these groups is honesty and openness. You can click here to see the importance of taking off the mask of pride. As our first song points out sometimes we are there for others and sometimes we will need them to be there for us. The second song points out that the real sadness in our world is the realization that not everyone’s heart is filled with the gladness of love for one another. Life is lived to its fullness when the Christ in each of us encounters the Christ in our brothers and sisters. I encourage every reader who is not already in one of these groups, to form a small Christian group and live out your life in true Christian friendship. St. Paul says it this way: “Carry each other’s burdens, and in this way you will fulfill the law of Christ.” (Galatians 6:2) 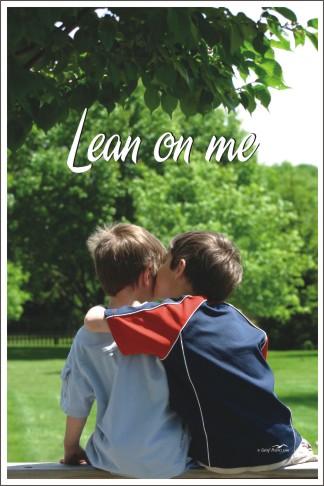 It’s been said that singing is praying twice. I know there is a temptation to just read these lyrics, but take the extra moment to click the link and sing along. Now that is enough of my words. Let’s let the songs themselves tell the story.

“Lean on Me” is a song written and recorded by American singer-songwriter Bill Withers. It was released in April 1972. It is ranked number 205 on Rolling Stone’s list of “The 500 Greatest Songs of All Time. Withers’ childhood in the coal mining town of Slab Fork, West Virginia was the inspiration for “Lean on Me”, which he wrote after he had moved to Los Angeles and found himself missing the strong community ethic of his hometown. He lived in a decrepit house in the poor section of town.

Sometimes in our lives

We all have pain

We all have sorrowBut if we are wise

We know that there’s

Always tomorrowLean on me, when you’re not strong

And I’ll be your friend

I’ll help you carry onFor it won’t be long

Somebody to lean onPlease swallow your pride

If I have things

You need to borrowFor no one can fill

Those of your needs

That you won’t let showYou just call on me brother

When you need a hand

We all need somebody to lean onLean on me, when you’re not strong

And I’ll be your friend

I’ll help you carry onFor it won’t be long

Somebody to lean onYou just call on me brother

When you need a hand

We all need somebody to lean onIf there is a load

You have to bear

That you can’t carryI’m right up the road

Call me (Call me)

If you need a friend (Call me) 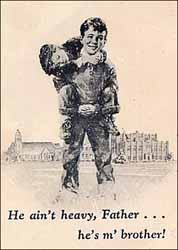 “He Ain’t Heavy… He’s My Brother” is a popular music ballad written by Bobby Scott and Bob Russell. Originally recorded by Kelly Gordon in 1969, the song became a worldwide hit for The Hollies later that year and again for Neil Diamond in 1970. The Hollies’ recording featured Elton John on piano. The phrase He Ain’t Heavy…He’s my Brother is also associated with Father Edward J. Flanagan, the founder of Boys Town.

He Ain’t Heavy He’s My Brother

The road is long

With many a winding turn

That leads us to who know where

Strong enough to carry him

He ain’t heavy, he’s my borther

So on we go

His welfare is of my concern

No burden is he to bear

He would not encumber me

If I’m laden at all

Then I’m laden with sadness

Isn’t filled with the gladness

Of love for one another

From which there is no return

While we’re on the way to there

Doesn’t weigh me down at all 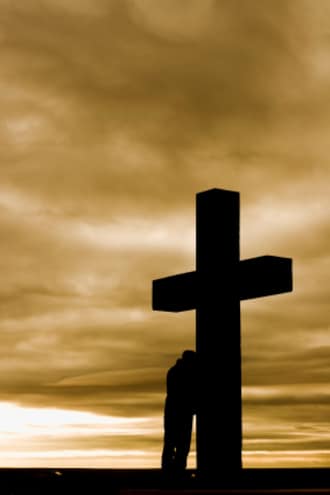 Heavenly Father, please give me the wisdom to ask for help when I need it and to be there for others when they need my help. Help me to recognize that by shedding my pride and asking for help that you are there in my brothers and sister to lighten my load, Amen.