It is said that a picture is worth a thousand words. Today you get both, the picture and the thousand words. This past week a dear friend of mine shared the picture abovewith me. Itwas painted by James Jacques Joseph Tissot who was aFrench painter. Tissot painted many pictures illustrating scenes from theBible; however, todayI want to concentrate on his “Jesus Tempted in the Wilderness”. Feel free to click here to print out a copy of the picture to look at while reading.

REFLECTIONS ON THE PAINTING

Tissotdrew his inspiration for his painting from Mt. 4:3 “The tempter approached and said to him, ‘If you are the Son of God, command that thesestones become loaves of bread” Usinghis artistic interpretation,Tissot chose to depict Satan as a starving beggar. While the Bible does not present Satan in this way, it may be jarring for us to think of him in this fashion. We have a well-entrenchedview of Satan as a snake, or a somesort of horned evil being, but in his cunning deception he might be more apt to present himself to Jesus asthe beggar Tissot presentsin his painting.

To aidus in our reflection on this painting, we are going to employ a technique used in the spiritual exercises of St. Ignatius, which is to place oneself in the place ofa character in a Bible verse and then meditate on the scene. In this case, we will put ourselves in the place of two different key characters in the picture: first Satan as the starving homeless, nearly naked, beggar and second as Jesus.

This thought provoking depiction of Satan as a starving beggar challenges our preparedness for his attack. Most of us recognize the normal temptations in our life and stand fortified for their attack. But as we stand prepared against where we expect Satan’s frontal attack, he attacks from the direction we least expect. Therein lies the trap. Clearly it makes sense that Satan would use the one thing that Jesus would have had a hard time saying no to. It would have been easy for Jesus to ignore the temptation of some well-dressed wealthy person or even some beautiful woman offering up these stones and asking him to turn them into food. Jesus had such compassion for the poor and down trodden so surely Jesus would have wanted to feed this starving beggar.

When contemplating on the starving man, I want you to focus on two ares of thought. Knowing Satan’s cunning ways, how does he tempt you? In what ways doeshe present himself to you thatmakes ittempting to fall for his lies? Satan knows to present himself and his temptation in ways you will findhard to resist andnearly impossible to recognize.

One of Jesus’ strengths was His compassion for the poor and Tissot depicts Satan attempting to manipulate Jesus’ compassion as an opening for temptation. Satan might use your involvement in good things like Church committees or programs for the needy to tempt you with pride, power, ego, control or other things to bring out the least Christian side of you. He might use your words to hurt someone. He might cause you to respond to the whims of your friends over the needs of your spouse. He might lead you to choose your own satisfaction over that of your children. Let’s face it, Satan will most likely hit us where we least expect it.

Now with our focus still on the Satan figure in the painting, let me ask you this question. Does Satan possibly use you as the source of temptation to another person? Perhaps someone you know has an idea for a new church project or a new ministry and you are the one who shoots down the idea by saying, “oh that has been tried before and it doesn’t work.”

Jesus recognized Satan’s deception in his conversation with Peter in Mt. 16: 22-23 “Then Peter took him aside and began to rebuke him, ‘God forbid, Lord! No such thing shall ever happen to you.’ He turned and said to Peter, ‘Get behind me, Satan! You are an obstacle to me. You are thinking not as God does, but as human beings do.” Jesus knew the words Peter was saying were not his own but rather the temptation of Satan. We must always be on guard that Satan does not use us to disrupt God’s plan for someone else.

Next let’s examine Jesus in the cave. Notice the temptation is so strong that Jesus tries to avoid even looking at the man. He does not even want to make eye contact with the tempter. Jesus appears to be nestled against the side of the cave for protection from the temptation. Jesus realized that if he gave in by just looking at the emaciated man, he would want to turn the stones into bread and feed him.

If we place ourselves in the position of Jesus in this painting, we can learn that we can’t even give in a little to the things that tempt us. Satan manifests himself in the concupiscence of the flesh, the concupiscence of the eyes and in the pride of life. Satan will use splendor and charm to make sin alluring in persons, places and things. We do not even want to look at the tempter.

Now let’s turn our attention to Jesus’ responses. With each temptation, Jesus responded by quoting scripture. This is a great lesson for us. Of course, this presupposes that we spend time reading and studying the scriptures so that in a time of need we can be prepared like Jesus was. Look at His scriptural responses but also notice that Jesus cast him away and Satan departed and the angels came to Him.

“It is written: One does not live by bread alone, but by every word that comes forth from the mouth of God”

“Again it is written, ‘You shall not put the Lord, your God, to the test.”

“The Lord, your God, shall you worship and him alone shall you serve”

“At this, Jesus said to him, Get away Satan!” Then the devil left him and behold, angels came and ministered to him.”

Here are a few verses that we could memorize to help us when we are tempted:

“Not as I will but as you will”

“I believe, help my unbelief”

“O God, come to my assistance! Lord, make haste to help me!”

“Teach me your ways, O Lord”

“Create in me a clean heart, O God”

I hope this painting is yet another helpful tool for you to draw closer to Christ during Lent. We all know we are under attack from the evil one. Jesus having Himself been tempted taught us to pray these words “Lead us not into temptation,” but He also taught us that if we are tempted, to be ready to respond with the powerful words of scripture. 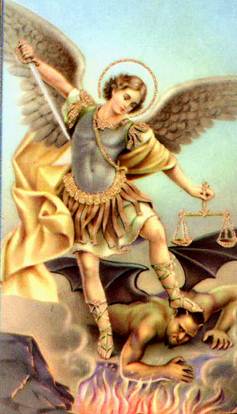 Saint Michael the Archangel, defend us in battle. Be our protection against the wickedness and snares of the devil. May God rebuke him, we humbly pray; and do Thou, O Prince of the Heavenly Host-by the Divine Power of God- cast into hell, Satan and all the evil spirits, who roam throughout the world seeking the ruin of souls. Amen.