The world was horrified this week as we watched the video of Alton Sterling, a black man in Baton Rouge being shot several times. A few days later the world again watched in horror as the fiancée of Philando Castile broadcasted the video of him after he was shot following a traffic stop in Minneapolis. Then, as if this wasn’t enough killing, we saw news of the police officers in Dallas being killed in execution style by a hate filled sniper.

Did any of these killings need to happen….no. While the verdict is not in on the first two shootings by police officers, the video evidence appears to be quite damning. Was race a factor in these killings? It is easy to presume as much and only time will tell. We don’t have to guess about that answer in the Dallas incident. There, the shooter said he was out to kill white people and police officers.

Okay so what should we do? As trite as it may seem the answer can be summed up in one word. LOVE!

Over the last few years we have seen the formation of the group Black Lives Matter. This week I have read Facebook posts where some people are blaming all white people or white privilege as the cause of the problem. These kinds of reactions usually just add fuel to an existing racial fire.

I found it an interesting coincidence that this Sunday’s reading, one of the most well-known stories in the Bible, was the story of the Good Samaritan. This story at its core is about loving others who are different from us. In the story Jesus tells of a Samaritan helping a Jew. The story ends with this command…GO AND DO LIKEWISE!

We do not need groups like Black Lives Matter or White Lives Matter or Red, Green or Blue Lives Matter or any other divisive group….we need to know all lives matter. All people are loved by God. It should not matter what color, nationality, sexual orientation, or religious beliefs a person has; we are called to love everyone. “Go and do likewise” was not a suggestion, it was a command. How are we doing with this command?

Jesus never once led a mass protest nor did He start a petition drive. Jesus did not speak out against the Roman’s occupancy of Jerusalem or against the crucifixions that were taking place. He was not there to change laws; he was there to change HEARTS. 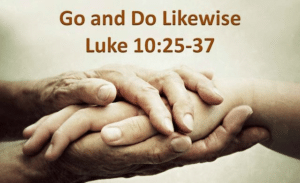 Anyone who is thinking of joining one of these marches or protests should ask themselves this question first. Why am I doing this? Do I believe all lives matter? Am I going to join the protest in an effort just to be seen on television or to really make a difference for all people? Perhaps these protests have become just another form of reality TV? Are people just hoping to be on the news or to be interviewed?

When Jesus wanted to bring about change He usually did just two things. Jesus looked at people and He loved them where they were. Can we do the same?

The people of Jesus’ time wanted an apocalyptic sign. They wanted the overthrow of the Romans. What they received instead from Jesus was unconditional love. Jesus healed hearts and lives one life at a time. He touched people. He looked into their eyes. He talked with them. He loved them.

What do we do today? When we see an injustice, when we see people in need, when we see laws that we object to because they go against our religious beliefs, to often we only want to start petitions and lead protests. I want to submit to you that that was not Jesus’s style. He changed hearts and minds one at a time.

This problem and this solution are not unique to the United States. This transcends all countries and all borders to all people. I am not for a minute saying things don’t need to change at a macro level. What I am saying is that we can all make a real difference if we start the change at our level. Can we begin to love all of those who are different than us? Think about this: Loving those different than us is exactly what Jesus meant when He told us to “Go and do likewise.” Are we prepared to do it……..starting today?

Jesus, please teach me to love like you do. Amen! 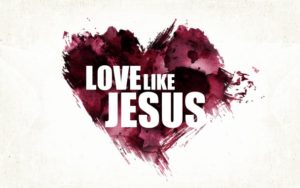 I want to extend a huge thank you to Gus Lloyd who invited me to be a guest on his popular morning show on SiriusXm Radio on the Catholic channel 129 last Thursday. Through this 20 minute interview many more people were introduced to Broken Door Ministries. https://guslloyd.com/