During the reading of the passion narrative on Palm Sunday my mind was drawn to a very small detail in Mark’s Gospel. Is it possible that this tiny detail has meaning for us now that we have celebrated Easter? Captivated by this detail, I was drawn to write this 4th Day Letter. 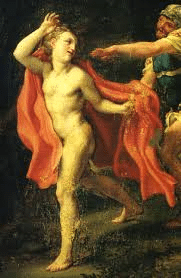 “And a young man followed him, with nothing but a linen cloth about his body. And they seized him, but he left the linen cloth and ran away naked.” (Mark 14:51-52)

Intrigued by the question of why this detail was in the Gospel, I initiated my investigation. I began to ask myself questions like; why was this unique detail included in Mark’s Gospel, who was this man, and how does his nakedness impact us today. Is it possible that Mark was suggesting that we too need to “get naked?”

Mark’s Gospel, the shortest of the Gospels, is often lacking in details. Uncharacteristic of his normal brevity Mark gives us a detail that the other Gospel writers don’t recount. Because the Bible is the inspired word of God I assume this detail must have meaning. So, further inquiry was necessary.

Some authors have suggested that the naked man was Mark himself, others say he was John the Apostle, some speculate he was a symbol for Jesus’ impending death and resurrection, some suspect he was emblematic of Adam. The speculations go on and on. Here today I want to focus mainly on one proposed theory, that our mystery guest might be a metaphor for all of the children of Adam and Eve…..hence you and I. Let’s dig deeper.

Was it St. Mark himself? Did Mark make a cameo appearance in his own writings? Mark would have been a young man at the time of Jesus’ crucifixion. Mark tells us in Mark 14:50; “And they all left him and fled.” But he continues by telling about this young man, presumably a disciple of Jesus who followed him clad only in a linen cloth. Why would he care about this man……unless Mark was referring to himself? Was he trying to make the point that up until the time he was seized, he remained after all of the others had fled? If it was Mark, narrowly escaping capture by running away naked, this is a fact that he surely would not have forgotten.

Was it John? In John’s Gospel 19:26 we read this passage: “When Jesus saw his mother and the disciple there whom he loved, he said to his mother, “Woman, behold, your son.” While not named it is thought that this is a reference to John the beloved Apostle. If so, was Mark trying to make a point? All of the Jews would have been familiar with the story of Joseph from Genesis 39:11-12 : “One such day, when Joseph came into the house to do his work, and none of the household servants were then in the house, she laid hold of him by his cloak, saying, “Lie with me!” But leaving the cloak in her hand, he escaped and ran outside.” Did Mark use this story of a naked man to compare John’s escape from the soldiers to Joseph’s escape from the adulteress woman? Were those who sought to kill Jesus like this adulteress who sought Joseph? 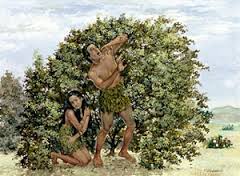 Perhaps as some suggest the man in the story was a symbol for Jesus. The young man wore linens which he shed in shame. Jesus was wrapped in linen in his shameful death. Jesus wore a white robe of Glory at His transfiguration. There was a young man at the tomb dressed in white. Is this the meaning of the special detail in the story?

Is it possible our naked mystery man could be a reference to Adam? Adam when caught in sin, sought to hide himself from God by covering his nakedness with a fig leaf. (Nice try Adam). Adam’s sin separated mankind from God, brought death upon the human race, and got him banished from the Garden of Eden. Was Mark now depicting this man, this time just outside the Garden of Gethsemane, shedding his skimpy linen cloth (fig leaf) and returning to nakedness because he wanted to make the point that through the sacrifice of Jesus, mankind no longer needed to be ashamed and was now once again free?

Nakedness as used in the Bible has many meanings. At times it can symbolize innocence and vulnerability yet at other times it represents guilt, shame and humiliation. Initially Adam and Eve where naked and innocent, but as soon as they sinned their nakedness made them feel guilty and shameful.

Don’t we all find that that when we sin we forfeit our spiritual innocence and feel guilty and ashamed? Adam and Eve sought to cover themselves with fig leaves. We also try to hide our sins behind our fig leaves which are the masks we wear when we pretend to have it all together. We often want to be seen by others in the covering of our church ministries that we involve ourselves in. We want others to see us covered in our charitable activities. Suffice it to say we don’t want others to see us in our sinfulness.

Maybe, just maybe Mark wants us to get naked, spiritually that is. He wants us to leave our attachments and the sins we cling to at the scene of the crucifixion. He wants us now with the freedom afforded us in the Easter resurrection, to experience the freedom of the innocent nakedness that God had in store for us at creation.

Because of our savior Jesus Christ we can acknowledge our guilt, and leave our symbolic loin cloth at the foot of the cross. He came so that as Christians we can experience joy and freedom. The grace of our God has restored the innocence we lost to sin. In the tomb our guilt and shame were buried with Jesus. 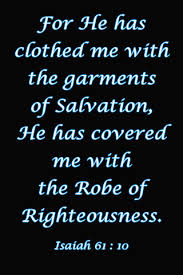 Romans 6:4 says it this way: “We were indeed buried with him through baptism into death, so that, just as Christ was raised from the dead by the glory of the Father, we too might live in newness of life.”

We are restored to newness on Easter.Possibly, St. Mark, knowing that Jesus nailed our sins to the cross, figuratively wants us to run naked and free. This leaves us with one final question, where are we running naked to? I would submit to you we are running towards the arms of our loving savior who with mercy, now that we have left our tattered sinful clothes behind, stands ready to cloth us in His righteousness so that we are properly dressed to enter the gates of heaven. See Romans 13:11-14 and Is 61:10.

Dear Heavenly Father, no human words can adequately express our thankfulness for the gift of your Son Jesus Christ. Help us to experience the true freedom of your resurrected Son, Amen!