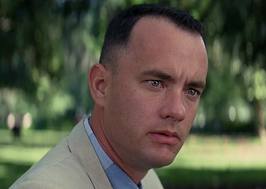 Tom Hanks,playing the role of Forrest Gump in the movie by the same name, popularized the phrase “stupid is as stupid does.” Today I want to examine just how stupid you and I might be when we can’t accept the fact the sometimes we are just wrong. That’s right. Sometimes we, by our actions, hurt others and most of the time we can’t accept reproof from someone we have wronged when they bring it to our attention.

So what exactly does “stupid is as stupid does” mean? It means that an intelligent person who does stupid things is still stupid. You are what you do. So are we sometimes stupid? I hope by the end of this email you will agree with me that we often times are. The good news is, with God’s grace and guidance, we can change.

Before discussing more about accepting reproof or blame, let’s see what Jesus says about giving reproof in this passage from the Gospel of Matthew 18:15-20?

“Jesus said to his disciples:

“If your brother sins against you,

go and tell him his fault between you and him alone.

If he listens to you, you have won over your brother.

If he does not listen,

take one or two others along with you,

so that ‘every fact may be established

on the testimony of two or three witnesses.’

If he refuses to listen to them, tell the church.

If he refuses to listen even to the church,

then treat him as you would a Gentile or a tax collector.” 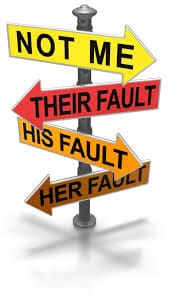 If you are like me every time you hear this Gospel you place yourself in the shoes of the person who  has been wronged. Today we are going to change things around. I want you to put yourself in the shoes of the person who has caused the wrong. In other words, Jesus is telling someone else how to approach you for the wrong you have done to them. Has anyone ever confronted you for having hurt them, maybe your spouse, children, parent, neighbor, friend or co-worker? How did you react? Was your first response to defend yourself? Maybe you denied fault. Perhaps you became argumentative. Maybe you, by your response and words hurt them all over again. I think it is safe to say as a rule most of us are not good at accepting responsibility for our mistakes nor do most of us accept criticism well. Why do we react this way and what can we do about it?

I think you would agree with me that when it comes to conflict resolution, being on either side of a conflict is hard but most of us find it harder to accept reproof than to give it to another. Of course to give someone reproof is to give them criticism, blame, or disapproval. In other words, it is to rebuke them, or reprimand them. Who wants to be on the receiving end of any of those words?

So if we agree it is hard to accept responsibility or to accept reproof does the Bible give us any clues as to how we should respond when someone does bring a wrong that we caused to our attention? Of course it does. Here are four passages from Proverbs: 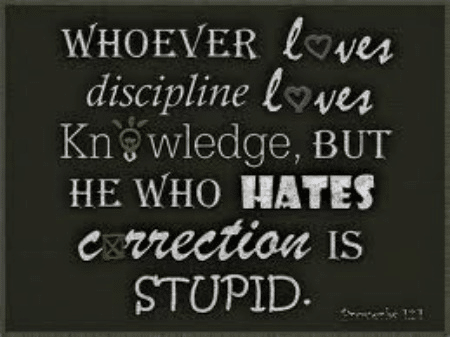 “The way of a fool seems right to him, but a wise man listens to advice”

“Listen to advice and accept instruction, and in the end you will be wise”

“Those that disregard discipline hate themselves; but those that heed reproof acquire understanding.”

And the verse that is my personal favorite on this topic and the one I named this email after:

“Whoever loves discipline loves knowledge, but whoever hates reproof is stupid.”

Do you see the common theme in the Proverb passages and the Gospel? Four times in this famous Gospel passage about conflict resolution the word “listen” was mentioned. Whatever we did to wrong someone in the first place may have been our first mistake, but Jesus taught us that rejecting counsel and reproof was an even bigger mistake! Learning to accept blame is not easy. 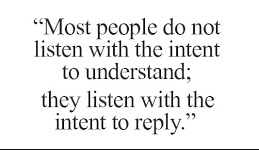 What do we often do? Our body language can clearly say a lot to the other person who is confronting us. This is especially true if we are sitting down when they confront us. Most people tend to lean back in their chairs and cross their arms when someone challenges or rebukes them. This body language essentially telegraphs to the other person that we really are NOT listening to them.

As I said earlier, both the Gospel message as well as the passages from Proverbs said we should LISTEN. It should be no surprise that professionals in conflict resolution recommend that we lean forward in our chair, listen with discernment, and do not cross our arms.

Accepting reproof requires a healthy dose of humility. We need to learn to be receptive to what the other person is telling us and not to be so easily offended. We must refrain from defending ourselves, and we have to take the time to honestly consider the other person’s words.

We all make mistakes. So why is apologizing so challenging to do? We all love to hear an apology, but giving one is a whole different ballgame.

Here is a sample list of some of the reasons we find it difficult:

I am sure every one of us has heard the old expression; “God gave us two ears and one mouth because He wanted us to do twice as much listening as talking.” This is essential advice in conflict resolution. 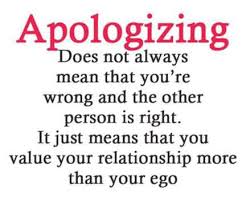 Here are some practical ways you and I can grow in accepting reproof. First we should remember, the goal is not to fix blame, but to reconcile. There is no doubt that accepting blame or criticism is hard, but if we listen to the reproof we can get a sense of inner peace.

I read an article on the web written by Psychotherapist Dr. Robi Ludwig and she offered this particle advice: “Apologies aren’t supposed to be easy. They are supposed to be soul-baring. That’s why, when done right, they are so powerful and rehabilitative.” She went on to write this: “It’s hard to admit that we’ve hurt someone’s feelings or caused someone pain, whether it’s intentional or not. It’s also hard to see ourselves in a less-than-positive light. It requires taking off the blinders we wear and facing our flaws. Saying sorry is meant to make us feel vulnerable. How could it not? But here’s the thing: It’s really important to do in order for us to have healthy relationships. We all want and need to feel safe with the people we allow into our inner circle. We want to know that the people we are close to, care about how we feel and are willing to admit their flaws. Not taking responsibility for wrong doings makes us seem unsafe or untrustworthy. And withholding an apology is certainly not going to win us any friends! Saying you’re sorry shows those you love that you care enough about them and the relationship to be aware of your shortcomings and take responsibility for your hurtful actions. In the end, making things right is way more important than being right.” 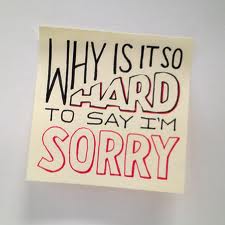 Once again the Bible has given us practical advice, this time on the difficult life issue of conflict resolution and undoubtedly listening is the key.

In 1982, the music group Chicago had a number one hit with their song HARD TO SAY I’M SORRY. The name of that song may summarize this entire message today.

Since I started with a Forrest Gump quote I will close with one too. I think it is safe to say we all have a ways to go when it comes to being humble and offering sincere apologies, and clearly none of us want to be stupid “and that’s all I have to say about that.”

Heavenly Father there is far too much conflict in the world. To the extent that I am the cause of any conflict please bring it to my attention and help me to listen when reproofed and accept responsibility for my actions and right any wrongs if possible. I ask this in the name of Jesus my savior, amen.

Latest posts by Brian Pusateri (see all)
← Walking Without A CanePerseverance →