Have you ever been on an exciting road rally scavenger hunt? In 2003, my wife and I had the opportunity to participate in one of these very exciting events. Today I want to make an important point about the necessity of “Church” and “Christian Community.” I will try to make my point by comparing our Christian journey to one of these scavenger hunts. I hope you find this analogy helpful.

Our event took place in Southern California. We were part of a larger group that was divided into groups of 4 people per car. As I recall there were about 10 cars in total. Each group was given use of a new convertible. We were presented with a small bag. The bag contained the following items; a tourist brochure, a map, a Polaroid instant camera, $20 in cash, and a cassette tape. When the whistle blew we were instructed to put the cassette into the player and follow the instructions, and everyone was off on the adventure.

When the tape began to play we all laughed when it began with the memorable theme song from the 1960’s TV show Mission Impossible and was followed by a slight variation of the familiar words from the show: “Your mission, should you decide to accept it, is to reach the final destination within the allotted two hours. You are limited to the use of only what is in the bag. This tape will self-destruct in five seconds. Good luck, Team!” 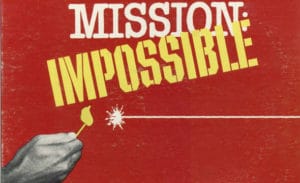 As followers of Jesus Christ we have also been given a mission. Like a Scavenger Hunt the objective is to reach the final location. On our spiritual journey that location is Eternity with God. Like the television show, there are dangers along the way. However because of Jesus’ death and resurrection our journey is not mission impossible.  The other major similarity is that team work and a community of people is necessary for success.

On our scavenger hunt the participants worked together as a team to get from one destination to another. At each destination we were given clues which lead us to the next location and clue until we arrived at the final location. Having EVERY CLUE was necessary or the final destination would not have been found.

In our world today, sadly too many people think they can do it alone. They often say things like: “Just let me pray to God on my own.” They add words like: “Who needs a church anyway, isn’t God everywhere?” Have you heard this said: “I don’t need all of those other people or the church to have a relationship with God?” In today’s analogy that is akin to not having all of the clues.

We all should desire to enjoy the fullness of truth. You and I individually don’t possess all there is to know about God. It is by God’s design that we need Christian community. Jesus ordained the Church. “And so I say to you, you are Peter, and upon this rock I will build my church, and the gates of the netherworld shall not prevail against it.” (Matthew 16:18)

St. Catherine of Siena who lived from March 25, 1347 until April 29, 1380 records that God told her: “For I could well have supplied you with all your needs, both spiritual and material. But I wanted to make you dependent on one another…”

Christian writer Dietrich Bonhoeffer once wrote: “We now know that we have been taken up and borne in the humanity of Jesus, and therefore that new nature we now enjoy means that we too must bear the sins and sorrows of others.”

Ecclesiastes 4:9-12 reveals this important message: “Two are better than one, because they have a good reward for their toil. For if they fall, one will lift up his fellow. But woe to him who is alone when he falls and has not another to lift him up! And though a man might prevail against one who is alone, two will withstand him—a threefold cord is not quickly broken.” 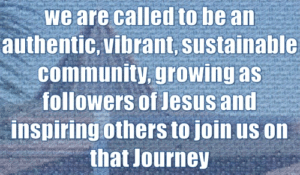 Jesus taught us about the coming of His Kingdom. The Church then is responsible to both proclaim Christ’s coming Kingdom and at the same time make it present as much as possible in the lives of those we meet each day.

God reveals clues to us each and every day and He does so through others who journey alongside of us on this path of life. If we miss a clue because we try to “go it alone” we most likely are going to have a hard go of it. It is possible we will not find our ultimate destination.

I find it ironic that our scavenger hunt started with the music from Mission Impossible. Trying to finish our Christian journey without the Church and without Christian community is mission impossible. God has so much He longs to reveal to us, so many clues along the course of life and He chooses to reveal those things to us through community. Community and His Church are His gift to us, so that we can all arrive at the final celebration.

Most gracious and caring God, thank you for all that you reveal to us each day through the gift of your Church. Please convict us all of the foolishness of trying to journey alone, amen.