Have you ever been near a street corner and one of the streets happened to be a one way street? While there, have you witnessed a driver turning the wrong way on that street? Maybe instead you were in your car and you encountered another driver suddenly going the wrong way on a one way street driving directly at you. My instinct, and sadly I think the instinct of most drivers is to say either out loud or at least to have the thought; “you idiot.” Maybe you are kinder and in your nicer tone you just calmly say to yourself “stop you are going the wrong way.”

In either case I think you will agree, we usually think poorly of the wrong way driver.At the point we actually utter or even just think either of those statements above we usually have no idea why the other driver happened to be going the wrong way. There is usually ample signage to inform the driver to avoid turning the wrong way but for some reason the driver was distracted and the warnings were overlooked. After our critical remark, “you idiot,” we suddenly find ourselves hoping this wrong way driver gets turned around without anyone getting hurt. We hope and pray they get re-routed in the correct direction.

Maybe instead of it being someone else, you have found yourself going the wrong way on a one way street. Even before sensing the impending danger our brain first turns to the sense of embarrassment, we hope no one who knows us is around to see our mistake. Our pride and ego go on high alert. Finally, we make a quick route correction thereby avoiding a collision. Does this sound familiar to anyone? 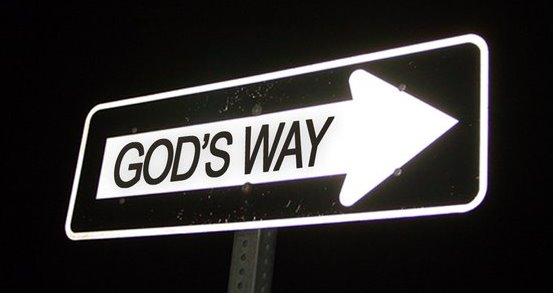 I wonder what God’s thoughts are when He sees us going the wrong way on the streets of life. I know one thing for certain; He does not even entertain the thought of thinking of us as idiots. I suspect His thoughts start out with words like “oh my dear child.”Now imagine yourself sitting at an outside cafe near a one way street. While sipping your coffee, you witness someone from out of town turn the wrong way and begin heading against traffic and nearly causing a serious accident. You might be empathetic and understanding when you notice the out of state license plate. You are just glad that they were able to get turned around and get on the right course without anyone getting hurt.Next, imagine the very next day sitting at that same cafe and surprisingly seeing the same driver make the same exact mistake. What would you think this time? Would you be as understanding as you were the first day?Finally this might seem absurd, but imagine that for 30 or 40 years you continued to eat at this same cafe and for 30 or 40 years you periodically witnessed this same person continually making the same wrong turn. Would your once understanding thoughts now be thoughts of exasperation? Would you begin to see this person as a fool? Would you be less understanding and less forgiving? Would you think that this driver is eventually going to be involved in a fatal crash? Would you think they need their driver’s license revoked? 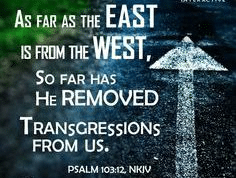 I wonder what God thinks when He sees us year after year making the same mistakes? Fortunately Psalm 103:12 states: “As far as the east is from the west, so far has he removed our sins from us” reminds us that each time we make the same wrong turn after having previously repented from our prior wrong turn, God’s sees it as our first offense.God forgives and forgets our sins if we seek His mercy. I suspect when He sees us driving the wrong way He walks over to our car window and kindly says, “I see you are lost and on the wrong path, allow me to help you.” He uses the same loving kindness the 100th time we turn the wrong way. He does remind us thoughthat we must be careful because our wrong turns can have fatal consequences. However even after rejecting His warnings again and again, if we are truly sorry, He stands ready to forgive us. 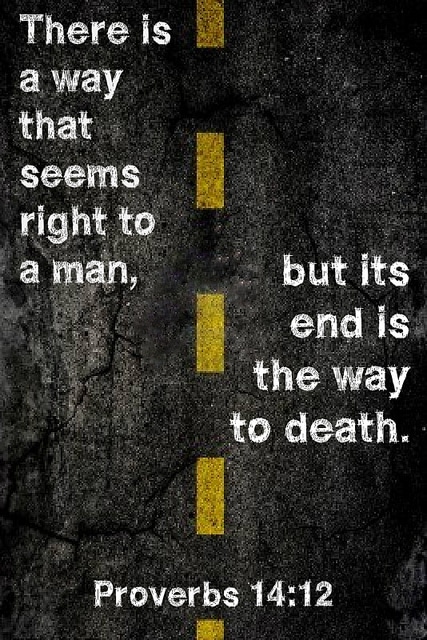 Today, while driving, many of us rely on GPS to guide us to go in the right direction. Isaiah 30:21 tells us that long before man invented GPS, God had already built an internal GPS guidance voice inside of each of us and it guides us to know what is the right way in life to go: “And your ears shall hear a word behind you: “This is the way; walk in it,” when you would turn to the right or the left.” How often do we choose to ignore this voice?Have you ever seen the sign along the highway that says your speed is being monitored by aircraft? Have you looked into the sky and said to yourself, “there is not a plane in the sky; I will drive as I please?” Spiritually speaking the sad reality is this, we often know which way to turn but instead we turn against the warning signs which God put in our path and we choose to drive the wrong way. Proverbs 14:12 tells us this: “Sometimes a way seems right, but the end of it leads to death!“My dear friends the reality is this; on our journey towards Heaven God knows every time we go down the wrong way on a one way street. But here is the good news; God is not prepared to revoke  your spiritual driver’s license quite yet. When you arrive at His spiritual Supreme Traffic Court ready to plead your case for driving the wrong way, He is the only judge who can void your ticket. Rather than punishing you with a fine, this kind judge will inform you that His Son was kind enough to pay the fine for you in advance.So I leave you with this question: “what direction are you heading today?