And just like that, at age 38, he was gone. It was totally unexpected. There were no goodbyes. He left behind his wife and 2 small children. Nothing will ever be the same for his family. Some die old, others far too young. Every day around the world, lives come to an end. One day my life will end. One day, yours will too. Then what? Please read more. 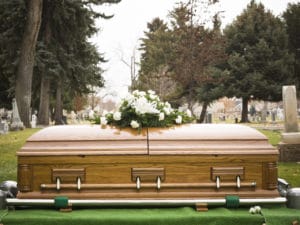 That young man was a friend to both my oldest son and my youngest son’s wife. They all three taught school together. Suddenly, with no warning, he was gone. Most likely, it was an embolism. In addition to dealing with their personal grief, these teachers also had to comfort their students who had just lost one of their favorite teachers.

Last night, as I was finishing this message, I received the news that one of the members of our church had just lost their son to Covid. He was only in his twenties. Death can be cruel.

Each night the Covid death update has become as common as seeing the weather report on the evening news. Imagine if we got the same update for every type of death. Every day on average 164,898 deaths occur worldwide. That equates to nearly 7,000 per hour, 110 per minute or nearly 2 every second. Of course, the one that really matters most to each of us, is our own death.

Death is inevitable. From the time of our birth, each day brings us closer to death. Death strikes fear in the heart of most people, some more than others. Death is a certainty, yet, we are often surprised when someone close to us dies. We can also be crushed when we receive a medical diagnosis that our own death in imminent. 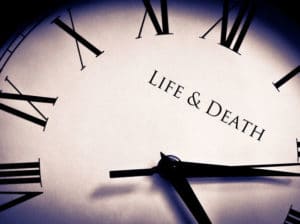 Fear of death is so common that there is a field of study called thanatology which examines the human reaction to death and dying? The following are just some of the fears studies have shown to be associated with death:

Having some fear of death is healthy. As a result, we take safety precautions, wear seat belts, have air bags in cars, wear masks, take vaccines, and use hand sanitizers. An unhealthy fear of death can cause someone to stop living. Their anxiety over death can keep them closed up in their homes.

Yes, death brings with it grief, loss, pain, and fear. John 11:35 tells us that “Jesus wept” at the death of His friend Lazarus. Luke 22:44 tells us that anticipating His own death, “Jesus was in such agony and he prayed so fervently that his sweat became like drops of blood falling on the ground.” 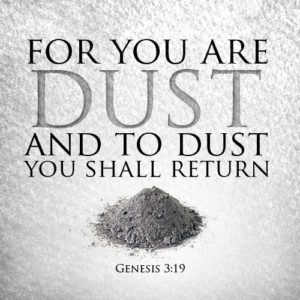 Genesis 3:19 reminds us, “For you are dust, and to dust you shall return.” Ecclesiastes 3:2 tells us there is, “a time to give birth, and a time to die.” 2 Samuel 14:14 says that we must indeed die and be poured out like water onto the ground.

In the past, people had much more contact with death. They covered their loved one’s body with spices to reduce the stench of the decaying flesh. They wrapped the body in a cloth and allowed it to decompose. When the decomposition was complete, the family gathered the bones and placed them in an ossuary.

Today, death has been sanitized and removed from our view. We no longer kill the animals that we eat, instead they arrive neatly packaged in our grocery stores. Unlike in the past, we no longer have to put down our work animals when they are dying. Our veterinarians, not us, are the ones who euthanize our pets when they draw near to death, and they dispose of the bodies. And, as for our loved ones, the mortician is the one who embalms their body and places them in the casket or cremates them and gives us their remains in an urn. In either case, we have little or no contact with the body of the deceased.

Sadly, we tend to put off thinking or talking about death. We should not do this! Removing death from our thoughts and discussion creates even more mystery and increases our fear of the unknown. St. Benedict told his monks to “keep death daily” before their eyes. Memento mori  is Latin for “remember your death.” Its been said that thinking about, talking about, and planning for our death helps us to live a more intentional life.

I was surprised to discover when doing my research for this article that psychological studies reveal those with no faith have the least amount of fear of death. Those with faith, who believe in an afterlife, have more fear. Those same studies, however, suggest that those with a strong faith have much less fear and far more hope, than lukewarm Christians who have a greater fear of eternal damnation.

Jesus came to conquer death. In that, we find our hope and reassurance. Hebrews 9:27-28 states, “Just as it is appointed that human beings die once, and after this the judgment, so also Christ, offered once to take away the sins of many, will appear a second time, not to take away sin but to bring salvation to those who eagerly await him.”

Finally, let’s allow the words from these two verses to drive our fears away. Romans 10:9, “If you confess with your mouth that Jesus is Lord and believe in your heart that God raised him from the dead, you will be saved.” Romans 10:13, “For “everyone who calls on the name of the Lord will be saved.”

Heavenly Father you comfort me with the words of Psalms 23:4-6. “Even though I walk through the valley of the shadow of death, I will fear no evil, for you are with me; your rod and your staff comfort me. You set a table before me in front of my enemies; You anoint my head with oil; my cup overflows. Indeed, goodness and mercy will pursue me all the days of my life; I will dwell in the house of the LORD. for endless days. Amen

Latest posts by Brian Pusateri (see all)
← Who Do You Want To Go To Hell?Storehouse Of Love →