Have you ever been asked to do something and your response was, “Not me, not now.” That might be an okay response for some things but not when it is Jesus doing the calling.There is a masterpiece painting that seems to capture this theme of “Not me, not now.” This well-known painting, known as The Calling of St. Matthew by Michelangelo Merisi da Caravaggio, depicts the moment that Jesus called Matthew to follow him. He too seems to be saying “who me?” 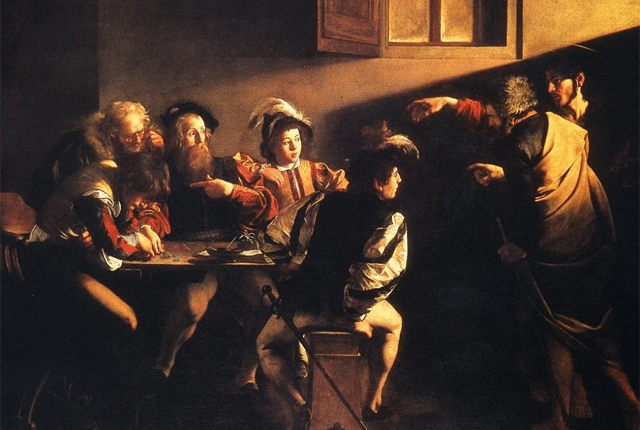 Let’s take a few minutes to study this painting and then I will tell you what it has to do with you and me. This painting is located in the Contarelli Chapel in Rome. Also in the chapel are two other paintings by Caravaggio, The Martyrdom of Saint Matthew and The Inspiration of Saint Matthew.First let’s look at the full picture. In this view, Jesus, accompanied by Peter, has come into the dark room of the tax collectors who are sitting around counting their money. Jesus is pointing to someone but the artist leaves it just a little unclear as to who he is pointing to.Now we will zoom in and look closer at the response of one of those sitting at the table. It is presumed that Caravaggio intended the bearded man to be Matthew. 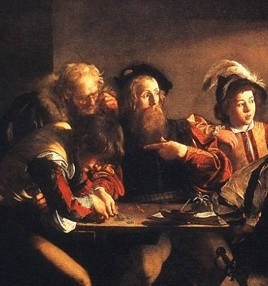 While some art critics are  unsure on this point, the theory that the bearded one is Matthew is strengthened when one takes into consideration the other two works in this series, The Inspiration of Saint Matthew, and the The Martyrdom of Saint Matthew. The bearded man who models as Saint Matthew appears in all three works, with him unequivocally playing the role of Saint Matthew in both the Inspiration and the Martyrdom.Now here is where the “not me, not now” comes back into play. Is the bearded Matthew pointing to himself and is he saying to Jesus: “You can’t possibly be calling me to follow you, are you?” Perhaps instead, Matthew is actually pointing to the other man whose head is down and who is not making eye contact with Jesus and Matthew is saying: “Do you mean him….. this man skimmed the tax money, you must want him.”In either response Matthew’s eyes speak volumes. Look close. He seems to be caught in a quandary. His dilemma is this: Matthew has been collecting tax money from his fellow Jews for the Romans and skimming for himself off the top. Matthew’s eyes convey what he already knows. He has been caught by this rabbi known as Jesus. 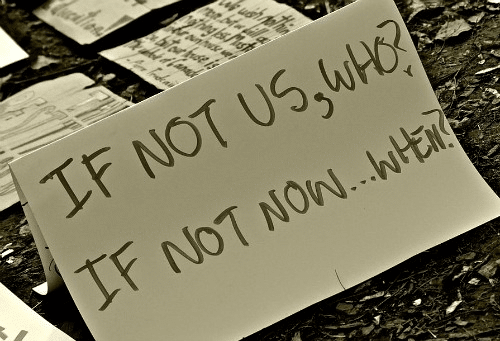 What will he do? Will he give up his lucrative business? Will he walk away from his money to follow this man called Jesus? Well, the Bible gives us the rest of the story. We know that Matthew admitted his sin, repented and followed our Lord.Just a couple of years ago this painting made its way back into the news. Soon after Jorge Mario Bergoglio (Pope Francis) was chosen as the new Pontiff, he agreed to an interview with Father Antonio Spadaro, editor in chief of the Italian Jesuit journal. In that interview Fr. Spadaro ask this question: “Who is Jorge Mario Bergoglio?”Pope Francis reflected for a moment. Here is a portion of his overall response: I am a sinner whom the Lord has looked upon.” He went on to say: “That finger of Jesus, pointing at Matthew. That’s me. I feel like him. Like Matthew. It is the gesture of Matthew that strikes me: he holds on to his money as if to say, ‘No, not me! No, this money is mine.’ Here, this is me, a sinner on whom the Lord has turned his gaze. And this is what I said when they asked me if I would accept my election as pontiff.”What does all of this have to do with you and me? Jesus is also pointing at us and calling out our name. He may me calling us to something or He may be calling us away from something. Maybe like Matthew, Jesus is doing both. 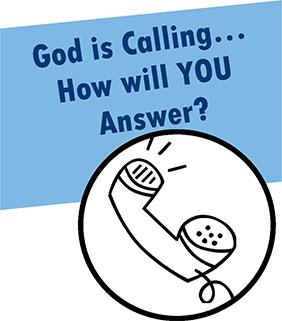 We are caught in the same quandary. Like Matthew’s money, Jesus may be calling us away from some area of sin in our life; something that we are too attached to. Instead, just as Jesus called Matthew to be His Disciple, He may be calling us into a new ministry or perhaps to take a new role in a ministry of which we are already involved. One thing of which I feel certain, in one way or another, Jesus is calling us.So what will your answer be? Are you willing to respond to His calling? Will you instead say: “Not me-Not now” and point your finger to someone else. A lot depends on your answer. What is holding you back?

Jesus, please give me the courage to respond to your call like St. Matthew did. Amen